Why Do We Sacrifice Humans to a God, Ideology or Nation? 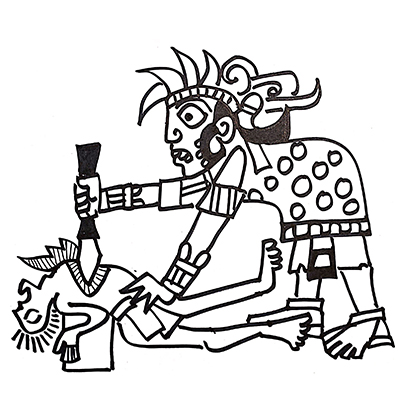 Monotheists tell the story of how their one god once asked his messenger to sacrifice his son, but observing his unconditional obedience, stopped the human sacrifice at the last minute and replaced the human victim with a sheep.

Polytheists tell stories about how different gods satisfy different needs depending on what offerings they receive. The offering can be a fast, an all-night vigil, songs, dance, alcohol, or maybe food: a particular fruit or grain, a particular bird or beast, or maybe a human.

The monotheists claim their one god advises them to wage wars on those who do not respect his messengers. This is argued as a divinely ordained political act, not superstition. Meanwhile, a human sacrifice to gain divine favour for personal gain, is not simply a crime, it needs to be qualified as black magic.

This divide became prominent especially in the 19th century, when science was on the rise, and it became important to protect monotheism. It was easy to dismiss polytheistic faiths as these belonged to the conquered natives of America, Asia and Africa. But there was nothing inherent in monotheism to withstand the scientific gaze.

So a new framework was constructed: one that separated faith from ‘blind’ faith. Faith came from industrial, monotheistic societies with approved knowledge systems. Blind faith and so black magic belonged to tribal, polytheistic societies of savages, who needed to be educated.

This is the time when Hindu reformers reframed Hinduism through the lens of Vedanta and made it more monotheistic, more religious, more acceptable. This meant the elite distanced itself from the more popular folk practices that were classified as occult, superstitious and Tantrik.

What are its predisposing factors?

We must keep background in mind when we read about the human sacrifices that are being reported across India, most recently in Bengal, Gujarat and Kerala. Earlier there were cases in Assam and Uttar Pradesh. In all these cases, there is a yearning for prosperity and good luck by those sponsoring the ritual.

The ritual itself uses vermillion, fire, flowers and invocations to popular goddesses linked to fertility, wealth and power by the occultists. The symbolism around the ritual reveals a deep faith amongst the subaltern in folk rites, which are deemed Tantrik for want of a better word.

Had no one been killed, no one would have bothered with these rituals. It would remain a matter of faith. When people do get killed, it becomes a crime. Everyone takes notice.

The predisposing factors are easy to understand: economic stress, unemployment, debt, desperation. People point to gullible people succumbing to the lure of sadistic charismatic charlatans. Some attribute it to mental illness. But a significant number of people blame it on lack of education, and the lure of the irrational over the rational.

People who talk against superstition in India, invariably end up attacking faith. And have been killed for it. Murders of Narendra Dabholkar and Govind Pansare are cases in point.

Isn’t it spread across faiths?

This gets mired in politics. In a Hindu-majority region, most occult practices will use the Tantrik, ritual idiom. Criticism of any occult practice eventually ends up sounding like an attack on Hinduism. This angers Hindutva nationalists, who argue that superstitions are not exclusively Hindu.

Take the case of Africa, for example. In Kenya, homosexuality is seen as possession by demonic spirits. The Catholic church does not call this irrational or superstition. In fact in Uganda, gay rights are equated by some Christian pastors as the sign of the Devil heralding the end of times.

How actually is science any different?

In academic circles, scientists and communists present themselves as atheists and rationalists, waging a battle with religious and superstitious forces, in their quest to create a better world. But the divide between rational science and irrational religion is an outdated framework and needs to be revised.

Philosophers like Bruno Latour, author of Down to Earth, who passed away a few days ago, have argued that a ‘fact’ is as much a cultural construct as faith. Science-based institutions construct facts using rigorous processes, such as data verification and peer review in order to generate trust. Faith-based institutions rely on charismatic leaders and the brute force of their followers. Both these groups influence, and are influenced by, various economic and political groups.

However, what makes science special is that it is based on doubt and is constantly transforming, creating new facts. Alt-science, religion and superstitions are based on certainty, and are static, reaffirming old ideas, rejecting new ideas.

We need to approach cases of human sacrifice not with elitist condescension, but with human empathy. We have to ask ourselves what makes us dehumanise other humans, and sacrifice them to a god, an ideology, or a nation.

This article is also listed under Indian Mythology, World Mythology