Why Do Hindu Gods Never Give Sermons? 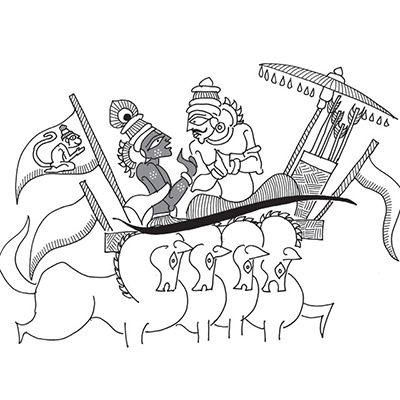 Buddhism speaks of the discourses given by the Buddha to thousands of monks, nuns and lay people at Jetavana. Jainism speaks of samavasaran, when the Tirthankara reveals Jain wisdom to all creatures, earthly and heavenly, who sit around him in a circle. Jewish folk speak of Moses speaking from atop Mount Sinai. Christians speak of Jesus delivering the sermon on the mount. Muslims speak of Muhammad giving his final farewell sermon after his first Haj pilgrimage after the conquest of Mecca. But Hindus? Do Hindu gurus give sermons? Yes, in the 21st Century. Following the Buddhist and Christian model, Hindu sermons on Advaita philosophy are popular, as attempts are made to homogenise Hinduism. But does Vishnu give a sermon? Does Shiva, or Ganesha, give a sermon? Is sermon a theme in the Puranas?

In Tamil temple art, we find images of Shiva as Dakshinamurti, seated atop a hill, under a banyan tree, facing the south, and giving lectures decoding the Vedas and Tantras. Shiva’s ‘south-facing’ discourse is not a sermon on how to live life, but a commentary that transforms mysterious Veda (Nigama) into tangible accessible Tantra (Agama). We are told all sages travel north to hear him speak; to restore balance to the world, Shiva tells Agastya to travel south. This story grants legitimacy to Agastya-muni, the legendary sage who spread Vedic ideas to the South. No such sermon is given by pre-Agastyan gods of Tamil literature: Ceyon (Murugan), Mayon (Krishna/Vishnu), Vendon (Indra), Kadalon (Varuna) and Kotravai (Durga), who are linked to different landscapes (mountains, forests, fields, seashores, and dry lands) and different moods of love (union, waiting, quarrelling, pining, and anxiety).

Gurus like Matsyendranath and Gorakhnath do not give sermons, though they travel around with hundreds of their disciples, shouting ‘Alakh Niranjan’ (salutations to the formless god), performing austerities and magic, helping and humbling people in the countryside. The Puranas refer to a gathering of rishis in Naimisha woods on the banks of the River Gomti, where they listen to stories of gods and goddesses through which Vedic wisdom is communicated. Stories, not sermons. Amar Chitra Katha and televisions serials have created the image of a rishi talking under a tree with students listening to him, in hermitages. But that is Brahmin children chanting the Vedic hymns by rote, without actually bothering to analyse it. No sermonising there either. Just memorising. Hindu gods do not have messages for humanity. By contrast, the Christian God Yahweh has prophets, and Allah, in Islam, has 1,24,000 messengers (paigambar) communicating over human history. Religion is about following the message. Hinduism is not a religion as there is no ‘message from God’ or ‘sermon of Ram’ or ‘sermon of Krishna’. Modern, 21st century gurus do tend to make the Bhagavad Gita a sermon; but it is a private conversation between a warrior in crisis (Arjuna) and his wise charioteer (Krishna). It is not a message for humanity — unless we assume all humans are in crisis wondering on the ethics of killing relatives for property.

In art, we often see Ram and Sita talking to Hanuman, and decoding the Vedas for him, as Shiva did for the siddha-rishis. The decoding is often private. We hear stories of how Shiva wants to decode the Vedas for Parvati in private but is overheard by fish, serpents and birds who are then cursed. They turn into sages: The fish-sage Matsyendrath, the snake-sage Naganath or Karkotaka, and the bird-sage, or Kakabhusandi. They share fragments of divine wisdom with humanity. These are the Upanishads, conversations between two people, like Janaka and Ashtavakra. These are two-way conversations between equals, not a one-way communication from the powerful to the powerless. The Hindu gods never do a ‘mann ki baat’. In Hinduism, the divine is within (jiva-atma) and can germinate to appreciate the truth of the world and life (param-atma). Conversations about people sharing (sam-vaad) different experiences of truth, thus expanding our mind with new ideas and thoughts. It’s not about getting people to align to one single way. For the divine seed germinates differently in different contexts, takes different paths, like no two trees have the same branches or roots. This appreciation of diversity, and uniqueness of every individual, is at the heart of Hinduism. There is no tribe in the spiritual realm. All people are not the same, and no one is a passive powerless recipient. There is no room for monologues, or sermons. Only dialogues, as in a good relationship. Give and receive, as in a yagna.