Why bother with icons? (Learn to respect your symbols) 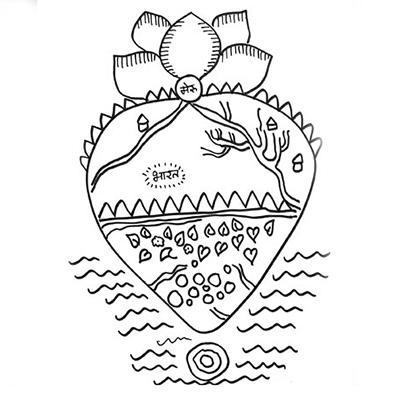 I remember the time my friend took me to the Kapaleshwara temple in Chennai. It took the two of us almost an hour to reach the sanctum sanctorum. No, not because it was crowded. But because we were enjoying the vast range of Shaiva iconography that decorated the temple from the gate through the corridors right up to the innermost structure in which was located the enshrined deity. Meanwhile, dozens of devotees were rushing in to temple to get darshan and rushing out to do their daily chores. No one seemed interested in, or even aware of, the sophisticated art that embellished the temple. This art developed in India over 2000 years, was codified in the Agamas, and was meant to communicate the Vedic view of life.

Somehow art appreciation is not seen as a religious or spiritual activity. The ‘common man’ is conditioned to be ‘common’ by rejecting all things deemed even slightly intellectual. But art appreciation is not an intellectual activity; it is a visceral activity. By looking at iconography we let the art evoke aesthetic sensations (rasa) and emotional outpourings (bhava) in our body. This is a valid means of non-cognitive transmission of the divine idea directly into our beings. Like champagne and caviar, even single malt whisky, art appreciation is an acquired taste, a sign of high culture. This is why art was so important in Hinduism. And it was made available to all.

I have seen many people bristling with rage at the idea that Muslims broke Hindu temples and the British stole icons from India and took them to England, or that smugglers are stealing temple icons today and selling them in the antique black market. But I have seen very few who bristle at the thought that neither they nor their children are clueless about art appreciation of Indic iconography. Yes, they may be able to distinguish Durga from Lakshmi thanks to calendar art, but can they distinguish Chamunda from Charchika, or Yoga-Narasimha from Lakshmi-Narasimha?

At an Indian consulate in a foreign country, a few years ago, I saw a Shiva Pinaka-dhari (bow holding Shiva) Chola bronze statue being identified as Vishnu. ‘Can’t you see the third eye?’ I asked the local official. The official did not know how to react. He clearly was clueless. ‘Sir, please don’t tell anyone or we will all get into trouble,’ is the only thing he said. And so, Shiva still remains Vishnu, no thanks to a culture department full of officials more interested in bureaucracy than art appreciation.

We can blame the government and the education system, but how many parents actually take their children to museums, or temples, and play the game of ‘let us identify this god’. How many Jain parents can actually take their children to a Jain mandir and together decipher the symbols of the various Tirthankaras, and identify the various yakshas and yakshis? How many of us know the difference between Gandharan Buddha and Mathura Buddha? Do we even care to find out where is the oldest stone image of Ram and Krishna on a temple wall? And no, it was not 5000 years ago, and certainly not on the banks of the now-dry Saraswati river.

And then when Euro-American scholars write about these icons, and call themselves experts, and Euro-American universities and museums publish their works in books with high production value, the bristling, the rage and outrage, of patriotic Indians unleashes itself once again. In other words, our icons have been reduced to ‘property’. Possessing them is more important than appreciating them. That is tragic.

As long as we do not appreciate our art, we will never notice that they are missing from temples. What gets lost is not a sacred object but a source of wisdom, and beauty, an idea carved in stone, a moment of history frozen in time. Yes, we want to bring back the plundered treasures back home. But once home, can we spend some time looking at them a bit more curiously?