Who we dance for? 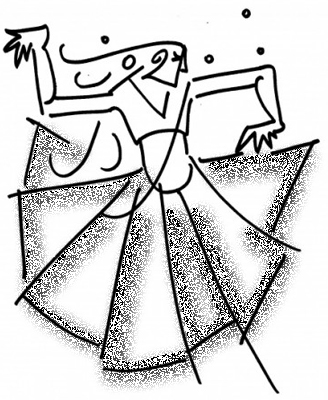 With dance shows such a hit on television, I realized how much dance is a part of Indian tradition. We have connected with our gods through dance. Our gods dance ! My friend, Mandakini Trivedi, the classical danseuse once noted that dance is the only art form to exist both in time and space. Music does not occupy space, but it occupies time. Plastic arts do not occupy time but they do occupy space. Perhaps that is why dance is special: it cannot be captured. Every moment marks creation of one pose, one gesture, one expression and the destruction of another.

There are different types of dance described in the Purans.

There is the dance of the apsaras, in Indra’s court. They are the nymphs who dance to the music of the gandharvas. They dance for the pleasure of the devas. They compete with each other. Often, kings are invited by Indra to judge the dance contest of the apsaras. They are the court dancers, those who exist for the entertainment of the king and his guests.

This is very different from Shiva’s dance. Popular mythology has it that Shiva danced when his wife, Sati, died. Thus dance was an expression of a mood: sorrow. The scriptures do not quite refer to this dance but it has become popular in retellings of Shiva’s lore. As a hermit, Shiva usually dances alone, in serene isolation, his eyes shut, blissfully unaware of anyone watching him. He dances for himself. To express his inner mood: peace, joy, sorrow. Those who watch him are spellbound. This is not dance for fun or entertainment. It is expression of an inner state. Occasionally, as in the Daruka forest, Shiva dances to symbolically communicate the secret of the Veda. This results in the spectacular form of Nataraja. Here, every gesture has a meaning. The idea of dance here is to communicate wisdom.

If Shiva is Nataraj, then Krishna is Natwar. He dances too, but dances with eyes open, entertaining those around him, getting entertained by their amusement and joy. He dances on the hood of Kaliya to celebrate his victory over the serpent. More importantly, he plays the flute and dances with the milkmaids, the gopikas, in Madhuvan, at night, in secret, in the light of the full moon. He dances to communicate his love for Radha. He dances for her, and with her and because of her. And she dances to please him. This is mutuality at its best.

Krishna, or Vishnu, as householder, always dances with a purpose, either to bind people together or even to defeat an enemy. As Mohini, he dances to kill the asura, Bhasma. Mohini insists that the asura, who has the power to reduce anything he touches to ash, match him in dancing step for step if he wishes to marry her. Bhasma agrees and in the course of the performance ends up touching his own head and turning into a heap of ash.