Who is a Hindu? Understanding Hindu stories 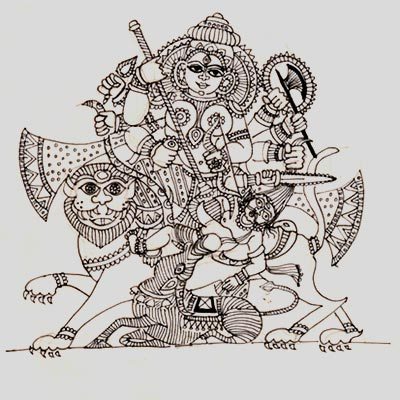 The story of Durga comes to us from the story of Devi Mahatmya, which is around 1,200 years old. Also known as Chandipath, it tells the story of how the devas were troubled by a buffalo-demon called Mahishasur, and as was their wont, they went to their father, Brahma, for help. Brahma, took them to Vishnu, who, in turn, took them to Shiva. But even Shiva said that he could not defeat the demon.

The only way the demon could be defeated was if all the gods released their inner powers and merged them to create a new entity, a goddess. So, from within each of the gods, a flame arose that merged in a blazing light and transformed into a multiarmed goddess called Durga. Durga then rode onto the battlefield, sitting astride a lion with her hair unbound, carrying in her numerous hands various weapons, each provided by a god. In the battle that followed, she managed to overpower and impale the shape-shifting buffalo-demon, defeating him.

At one level, it reminds us of the power of collaboration as the potency of various Vedic and Puranic deities come together to create Durga. All over, Durga festivals see members of different communities in the village participating in the celebration in different ways. The potters, the blacksmiths, the weavers, the garland-makers, the farmers, the herdsmen and even the local sex workers. The last contribution has been especially highlighted in Bollywood films for dramatic reasons, overshadowing the cooperation of all communities that constitute the village. A typical Durga image, established collectively, represents the collective power of the village which helps in defeating calamities. This then becomes an anthropological approach in the study of Hindu mythology.

In recent times, many Left-leaning academicians have been trying to give the story of Durga a racial tone, arguing that they have access to original authentic tribal lore, according to which Mahishasur (since he is painted dark in the images) represents tribal communities, while Durga, because she is painted yellow or cream in the statues, represents the North Indian Aryan communities that attacked and overcame the local indigenous population. This makes the Durga story, a story of oppression, aligning neatly with Left-wing politics and 19th century racial theories, and not 21st century understanding of India’s history.

India emerged in a very complex way over 3,000 years, with many communities and many tribes engaging with each other, sometimes with hostility, sometimes with friendliness and trade, creating various kinds of village settlements and communities in India. This is not a simple narrative of one group of people from the north (or from outside India) defeating an indigenous population, or that of the fair complexioned defeating the dark one, a narrative which was much favoured by European Orientalists and Marxists.

This narrative forgets that, according to historians, the classic Durga image of a lion-riding, multi-armed goddess impaling a buffalo-demon started to appear in India only 1,500 years ago, after the rise of the Kushan empire. In some of the earliest stories, the goddess herself comes from tribal communities: the earliest reference to such a battle-ready, blood-thirsty goddess comes to us from Tamil literature where she is called Kotravai. In alternate forms, she is portrayed as being gaunt, having fangs and claws and is called Chamunda, not quite dressed in bridal finery as the current Durga.

Another early form, worshipped in tribal communities, which becomes the earliest reference to her, is Vindhya Vasini (she who resides in Vindhya mountains), with Vindhya being the location where the tribes were living. She was the tribal goddess who lived on top of mountains, much like many Grama-devis today. Thus, to transform a tribal goddess of dark complexion into an Aryan invader with white complexion is sheer politics and nothing else.

In the same way, extremist right-wing groups tend to glamorise and transform Durga into a figure who defeats colonial powers. They reframe the battle of Durga and Mahishasura as the battle of good over evil. They forget that words like ‘evil’ have no Hindu origin. This word comes from Judeo-Christian traditions, which have the concept of the Devil. In Hinduism, even ‘demons’ are children of Brahma. And all actions are part of the karma ecosystem. Durga’s battle is part of fertility lore as well as the inherent violence that accompanies the transformation of nature to culture, and challenges the romantic notions of non-violence popularised by Buddhist, Jain and even Hindu monks.

By making Durga kill the demon, as Vishnu and Shiva have done before, and save Indra, the goddess is being established as a key player in the post-Vedic Puranic-Agamic pantheon. It indicates the rise of a syncretic tradition, where Vedic and Brahmanic ideas from Gangetic plains are being reshaped by various tribal lores from East, West, South and even North India to create a new Hinduism in the post-Gupta period. Those who wish to understand Hinduism and Durga need to break free from the political gaze of the Left and the Right and do genuine ‘darshan’ of the goddess in all her glory.