Who is a Hindu? The Curious Case of Brahmins 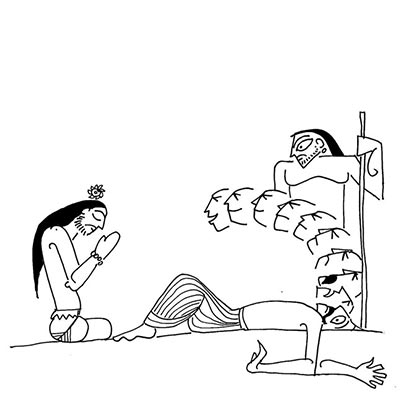 In the Ramayana, Ram kills Ravana, who abducted Sita. Ravana, though the king of rakshasas, is considered a Brahmin, a great scholar of the Vedas, a devotee of Shiva, a composer of many Shaivite hymns and astrological texts. Therefore, in many parts of India such as Rameswaram and Rishikesh, temple legends state that Ram atoned for the crime of killing Ravana by performing penance. In the Mahabharata, Krishna encourages the Pandavas to kill their guru, Dronacharya, also a Brahmin. The beheading is done via Dhrishtadyumna, the commander of the Pandava forces, Draupadi’s brother. This is not just the killing of a Brahmin, but also the killing of a guru, a teacher.

In the Puranas, Shiva is also associated with the act of killing a Brahmin. He slices off the fifth head of Brahma when the creator chases his daughter, Shatarupa, through the sky. This skull gets stuck in Shiva’s hand and he wanders the earth until he comes to the city of Kashi. It is here that the skull is said to leave Shiva’s hand after he washes his hands in the Ganga. Shiva is called Kapalik, or the one who wandered the earth with the head of Brahma. Shiva is also associated with the killing of Daksha Prajapati, another Brahmin. Daksha insulted Shiva and would not let his daughter, Sati, marry Shiva.

In art, Shiva’s fearsome form is shown holding Brahma’s head in his hand. Ravana is a Brahmin. Drona is a Brahmin. Brahma is the first of Brahmins. Daksha is the Brahmin patriarch. All are slayed by the avatars of Vishnu and by Shiva himself. Yet everybody refers to Hinduism as a Brahmanical religion, where Brahmins are positioned as being powerful. Perhaps it’s because Brahmins wrote texts or made laws. But why would they repeatedly tell stories where Brahmins are depicted in villainous roles or are beheaded by Vishnu and Shiva? This demands reflection.

In Vedic times, over 3,000 years ago, knowledge was orally transmitted. Brahmins were the specialists who transmitted knowledge of how to experience Brahman (god) through the performance of yagna and the esoteric ideas of the Upanishads. Therefore a Brahmin’s murder was considered tantamount to loss of Vedic knowledge, and deemed the worst of sins. This rule, however, continued after script was introduced (roughly 2,300 years ago in Mauryan times), as the Brahmins had acquired favoured positions in society. They were seen as the people in touch with divinity, and they helped make kings, connecting them to the solar and lunar dynasties. They were revered by kings who gave them land in exchange. However, royal texts composed over 2,000 years ago, such as Ramayana and Mahabharata, speak of Brahmin killing.

When the first temples were being built, Brahmins were seen as the purest and hence were allowed to enter the innermost chambers, where the image of the deity was kept. Around this time, around 1,500 years ago, Puranas were also being composed and they repeatedly speak of Brahmin killing by Shiva and Vishnu. If we regard Brahmin as a ‘caste’ (jati/varna), then Ravana and Drona can be seen as abandoning their traditional vocations and behaving like warriors and kings. They were therefore punished for breaking their varna-dharma (family vocation). Similarly, Parashurama, a Brahmin, killed kings such as Kartaviryarjuna who did not behave like rulers, or in other words, didn’t follow their varna-dharma.

If we see Brahmins metaphorically as the transmitters of the Vedic idea of god, then Brahmin killing may have something to do with maya (delusion) and ignorance (avidya). Brahman comes from the amalgamation of “Brah”, which means “expansion”, and “mana”, which means “mind”. The one with an infinitely expanded mind is “Brahman” or god. Human life is about striving to expand our minds and getting closer to god. When the mind is contracted with hunger and fear, we are egotistical, dominating and territorial, succumbing to jealous, vanity and greed. When the mind is expanded, it is free of hunger and fear, and we are empathetic and generous. When Brahmins, who are supposed to help others expand their mind, themselves submit to their contracted mind, they stop being worthy of veneration. And so when Brahma displays lust, Daksha displays disrespect, and when Ravana clings to another man’s wife and Drona gets obsessed with his son and valorises loyalty for ungenerous kings, gods kill them.