Who is a Hindu? No false gods in Hinduism 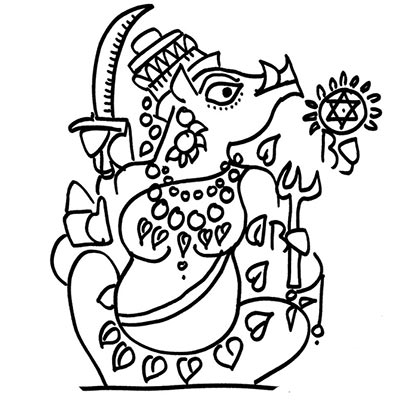 The Hindutva brigade despises Christian missionaries, though Hindus have always valued missionary schools. Secular media would like to reduce Hindutva attacks on missionaries into a simple villain-victim narrative, but those interested in going deeper will realise it has much to do with the incompatibility of their respective mythologies. Missionaries speak of One God and rejection of ‘false’ gods. They cannot accommodate multiple manifestations of the divine. By contrast, Hinduism celebrates diversity, many gods, which some people view as polytheism and others as qualified monotheism where the same one God manifests as multiple gods. A Hindu has no problem worshipping baby Jesus alongside baby Krishna. However, in August 2017, when a Ganesha icon was taken into a church in the Spanish regions of Ceuta and Melilla, the presiding Christian priest, Vicar General Father Juan JosÃ© Mateos Castro, was forced to resign in disgrace following outrage from church officials. We would like to say that all religions are the same and they all preach love but the reality is polytheistic mythologies such as Hinduism have no problem with monotheistic mythologies of Christianity, or Islam, or Judaism. But the opposite is not true. In fact, monotheistic mythologies despise each other too.

Secularism is conflicted between allowing all gods (polytheistic or Hindu approach), or rejecting all gods (atheistic or Christian approach). Nehruvian secularism sought to make the ‘Idea of India’ greater than all gods, religions and castes of India. However, over time, minority religions and castes were seen as being treated as favourites, at the cost of Hinduism, angering many Hindus. Hindutva has taken advantage of this anger, but has turned the nation-state into a Goddess, Bharat Mata, and demands she be venerated like a Hindu deity, overshadowing all other deities, knowing fully well that Hindus can do that relatively easily, but not Christians or Muslims with their doctrine of never bowing before ‘false’ gods. Politicians in India, and elsewhere, behave like prophets who bring the message of the ‘true’ God (either of secularism, or Hindutva, or development, or science, or Islam, or Christianity, or America, or Britain, or Europe). They present themselves as those who will save the world from the ‘other’: the false god, from the anti-nationalist within to the immigrant/invader without. Getting votes is just like missionary activity. The political leader is the evangelist. Every speech is about converting people to the true path.

In a Hindu temple, there were always many gods, the principal god being the most powerful belonging to the ruler. When the ruler was defeated, his deity would be claimed by the winner. The god of the losing king was never rejected; it was never false; it was just lower in the hierarchy. So, in Puri temple, Odisha, one finds images of gods brought by the local kings from distant Kanchi. To make peace between rival gods, they would be merged. And so Shiva and Vishnu rivalry was resolved by creation of a new deity, Hari-Hara, who is both Shiva and Vishnu. In other strategies, other gods would be seen as consorts or children or siblings. The process involved gradual appropriation and assimilation. Many temples have dargahs next to them, with Muslim holy men blessing devotees going to Hindu temples. We see this in the shrine of Vavar-swami located on the road to Sabarimalai, in Kerala. This is how traditionally secularism and co-existence worked in India. Every street, every neighbourhood, every village, very clan had their own god. Each god became most important on its festival (jayanti). On other days, it was subsidiary. There was no absolutely all-powerful god, all the time. Puri Jagannath, who is a vegetarian deity, acknowledges the value of the non-vegetarian Tantrik Varahi-devi by sending flowers to her temple regularly. Modern doctrines of secularism, atheism, democracy, even science, are structurally aligned to the monotheistic mythology of Christianity, where there is room only for one truth. There is no such thing as other truths; there are only false gods. This is the result of centuries of colonisation and subsequent power of the Western discourse. Hinduism does not fit into this discourse. It has no concept of false gods, or one all-powerful deity. All gods are limited, and part of a limitless divinity that defies definition. Limited truths (mithya) are within the limitless truth (satya), not outside it. This accommodative way of thinking is very different and very unique to the Indian subcontinent. Jainism called it anekanta-vada. Mahayana Buddhism called it the doctrine of infinite Buddhas. Its biggest challenge is accommodating those who do not reciprocate. Hindus can always see Jesus as a form of the divine, but will Christians ever be able to see Ganesha as another manifestation of Jehovah? A Hindu will celebrate atheism but will the atheist celebrate monotheism or polytheism? These are questions we need to ponder as we move ahead in the 21st century.