Who is a Hindu? Hinduism in the Caribbean 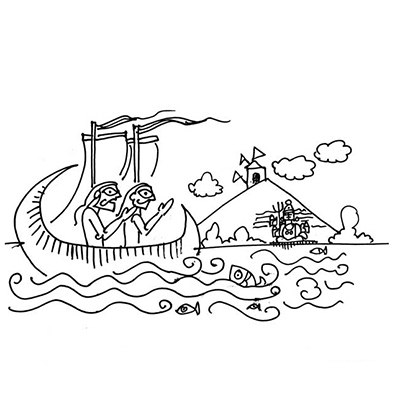 Fifty years before Swami Vivekananda gave his famous speech on Hinduism in Chicago, the religion was being practised in the Caribbean. Even today, it is an important religion among Indians who live in Guyana, Suriname, and Trinidad and Tobago. This is the result a migration that began 150 years ago.

After slavery was abolished in the 19th century, European-owned sugar plantations of the West Indies desperately needed new workers. They wanted cheap and skilled labour fast. The people they had enslaved before refused to submit to exploitative conditions, so plantation owners turned to European colonies. Chinese immigrants, while skilled, struggled with the warm weather of the West Indies and this resulted in a great demand for labourers from India. Thus began the system of indentured labour.

A large number of people mostly from the agricultural and labour classes, migrated all the way, beyond the Cape of Good Hope, to Americas to work in sugar plantations in unsanitary and inhuman conditions for paltry wages. Almost half a million people, including a small section from upper castes, migrated, an indication of the lack of opportunities in India back then. While many later returned to India, after serving the indentured period, a large proportion stayed back, establishing a new form of Hinduism that is still practiced.

A unique feature of Caribbean Hinduism is that it doesn’t have the caste system. People in this community came from mostly Bihar, the United Provinces and the Madras province, belonging to different castes. As they travelled in ships together and lived side by side, they could not follow the rules of the traditional social hierarchy based on purity. There were very few women among the migrants so it was not possible to marry only within a particular caste.

Irrespective of their social status in India, they all did the same kind of work here, so the caste barrier eventually collapsed and they became a single homogenous community. However, there is a small section of people who call themselves Pandits and function as Brahmins. They see themselves as the elite, directing people in spiritual and ritualistic ways.

There are three key reasons the Hindu community has become very strong in the Caribbean. First, they were treated very badly by local Christian communities, which saw them as primitives and idolaters. Even today, they have to withstand the hostility of Christian communities that are far more dominant locally. Second, they also faced hostility from Afro-Caribbean communities, which resented them for ending the negotiation advantage they had historically enjoyed with the plantation owners. The third factor was the arrival of Hindu reformer groups like the Arya Samaj in the early 20th century that rejected post-Vedic rituals and the worship of idols, upsetting many Caribbean Hindus who had sustained the religion through these very practices, including reading the Ramayana.

In fact, what united the Caribbean Hindus in the times of great hardship were religious texts such as the Ramayana of Tulsidas, Bhagavata Purana, which tells the story of Krishna, and Bhagavad Gita from the Mahabharata. The reading of these sacred texts and singing of bhajans and kirtans to Hindu gods such as Ram, Krishna, Shiva, Laxmi, Saraswati and Durga bring the community together even today. Private pujas and public yagnas basically narrate the Bhagavat katha, creating a feeling of community.

Indentured labours established temples despite much opposition. There is even a pilgrimage centre on the Caribbean islands. A shrine of Virgin Mary is said to house Goddess Kali, locally called Siphari Mata, although many resident Hindus oppose this worship fearing it will lead to conversions to Christianity. Hindus celebrate Holi in spring and Diwali in autumn. The philosophical background, under the influence of new gurus, has become Vedantabased bhakti and yoga, and these tend to be ritualistic and orthodox.

The easiest way to identify a Caribbean Hindu is to look at their house from outside:you will see a jhandi, a pennant of different colours that represent different gods. Hanuman, for example, is represented by saffron; Durga red; Lakshmi pink. This jhandi is hoisted right in front of the house and it remains in place till it naturally disintegrates. It has become a symbol of Hindu identity in the Caribbean, a reminder that Hinduism arrived here 150 years ago, survived, thrived, and re-framed itself for local conditions.