Who is a good Hindu father? 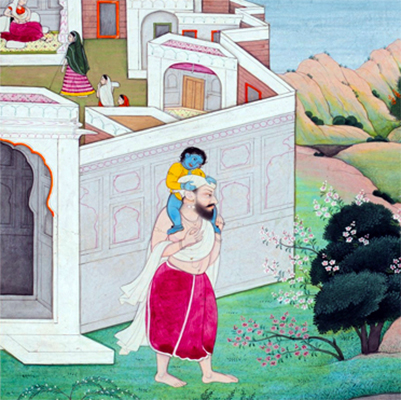 Indians are obsessed with their mothers. An overview of Bollywood films reveals that. Mothers can do no wrong. They always sacrifice their life for their children. Good sons always choose mother over wife. By contrast, fathers are considered absent, leaving the mother to take care of the child. Or they are tyrannical, demanding obedience from sons. This is often Hindu mythology. But such conclusions are reductive, a classic case of cherry-picking, because Hindu mythology has all kinds of fathers, and mothers — from good to bad, from loving to indifferent.

In the Ramayana, for example, we can see how Dashrath is obsessed with his sons and does not want to let them out of his sight, even when Vishwamitra offers to educate them and demands that they accompany him to the forest. Janaka, on the other hand, is very happy to raise Sita whom he finds in a field. In Lanka, we know Ravana’s son loves his father so much that he is willing to fight and die for him, despite knowing that Ravana is in the wrong, holding another man’s wife captive.

In the Mahabharata, there is Shantanu, whose own child is raised by his wife Ganga, who has deserted him, while he adopts the twins, Kripa and Kripi, children of a rishi and an apsara, abandoned by both on the forest floor. Pandu’s children are actually not his biological children; his two wives have conceived them through the gods. As children of his lawfully wedded wives, they become Pandavas, his children, rightful heirs to his kingdom, as per Kuru law.

Krishna’s story introduces us to loving fathers: his foster father, Nanda, and his biological father, Vasudeva. Krishna himself has many sons, such as Pradyumna and Samba, and grandchildren such as Anirudh. Krishna goes along with Pradyumna to fight Banasur to rescue his grandson, Anirudh, imprisoned for loving Banasur’s daughter. Balarama fights Duryodhana to rescue his nephew, Samba, imprisoned for loving Duryodhana’s daughter.

We hear of bad fathers such as Hiranyakashipu, who tortures his son, Prahalad, because Prahalad values Vishnu over his father. Uttanpada is so spellbound by one of his wives that he ignores his other wives’ children, especially Dhruv, who leaves home in search of a father who will love him always, and ends up finding a spot on the divine lap of Vishnu. We hear of Shantanu who robs his son of a perhaps happy, conjugal life so that he can marry a younger woman, and of Yayati who asks his sons to display their love for him by exchanging their youth for his old age. We hear of Ram, who chooses the kingdom’s gossip over innocence of his pregnant wife, and allows his sons to be raised by her, alone, in the forest.

Mahabharata informs us that Arjun’s children are raised by their mothers. Chitrangada raises Babruvahana, Ulupi raises Iravan and Subhadra raises Abhimanyu. Bhima’s son Ghatotkacha is raised by his rakshasa wife Hidimba. Here, fathers play no role in the child’s upbringing. Both in Ramayana and Mahabharata, we find fathers and sons fighting. Ram’s royal horse is claimed by Luv and Kush who fight their father. In the Mahabharata, Babruvahana does not allow Arjun’s horse to enter his kingdom. In the fight that ensues, it is the son who kills the father and the father is later revived. This is seen as poetic justice, as the father pays for abandoning the mother.

Puranas are full of stories where apsaras leave their children, after they are born, for men to raise them, as in the case of Vibhandaka, who raises Rishyasringamuni, Bharadwaj who raises Dronacharya and Vyas who raises Shuka. In each of these cases, an apsara takes the form of an animal or bird, and the very sight of this celestial creature causes the rishi to spurt his semen, which then transforms into a child — who then is ignored by the apsara. The oldest such story of a woman abandoning her lover and their children for her own pleasure comes from Rig Veda, where Urvashi leaves Pururava and their children and returns to the pleasures and freedom of paradise.