Where Do Rishis Come from? 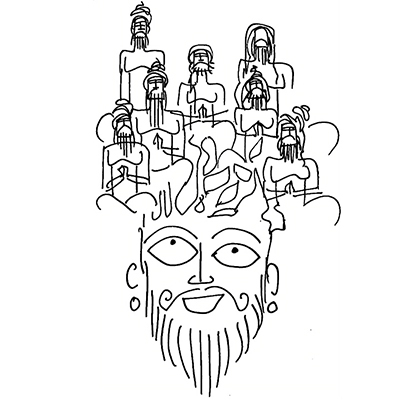 Many believe rishis are special beings, who have access to special mantras. They understand the vibrations of the universe. They communicate these mantras through words, chants, and hymns of the Vedas. They play a very important role in Vedic literature. They can summon the gods; they can curse the gods. They can create harmony between gods and humans. This makes them very powerful. But where did they originate from?

In the later Puranas (1,500 years old), Brahma’s mind creates them. Hence, they are the Manas Putra, the mind-born sons of Brahma. Yet, in Vedic literature known as Brahmanas (2,500 years old), the origin is interesting. In one story, the gods, Mitra and Varuna, see the apsara, Urvashi, and spill their semen. The semen falls partly on the ground, partly on a pot, and partly in water. From what falls on the ground, Vasishta is born. From what falls on the pot, Agastya is born, and from what falls in the water, Matsya is born. The Vedic scripture known as Brahaddevata (2,000 years old) has similar stories. Here, the goddess Vak (speech) takes the form of a woman while the gods, Ka and Prajapati, are performing yagya. Seeing her, they spill semen. From the semen, fire and its embers are born Angiras, Bhrigu and Atreya.

These are obviously metaphors to explain the obscure nature of the origins of the rishis. It raises many questions: Why are the fathers twin gods? Why are two male gods necessary for the production of rishis? Why does an apsara cause their arousal? Why does the semen not fall inside the body of the apsara, but instead inside of a pot or on the ground and in water? We can speculate the answers.

In later literature, like the Mahabharata and Ramayana, one finds similar stories. Bhardwaj sees the apsara and spills semen, which falls in a pot. Drona is born from this. Vyasa, seeing an apsara take the form of a parrot, spills semen on fire sticks, from which Suka Muni is born. Vibhandaka sees an apsara, spills semen which is eaten by a deer, who gives birth to the horned Rishyasringa. Saradvan sees the apsara Janapadi, releases semen on weeds, that turn into a boy and a girl are born, Kirpa and Kirpai.

Are these tales of Aryan men who migrated to India and married non-Aryan women who were seen as pot, sticks, weeds and ground? Are these illegitimate births, outside marriage? Are these abandoned children? Are these queer men attaching themselves to polyandrous women? Depending on our own emotional and sexual maturity, our anthropological and sociological lens, our politics and our comfort zones, we can read the scriptures in different ways. What they can reveal is that the ‘original Vedic seers’ were not born from whatever we now call ‘pure’ unions.