When the goddess demands cross dressing 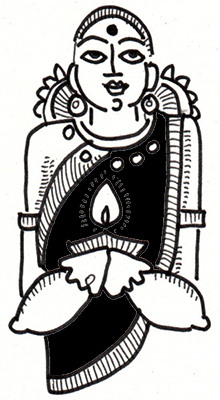 Once a year, at the temple in Kottankulangara in Kerala, at Chavara, near Kollam, hundreds of men dress up as women and worship the Goddess Bhagavathy, with lamps. This unique ritual is called ‘Chamaya Vilakku’ (make-up lamp), and the men come to the temple at night in a long procession with lighted lamps in their hands. The ritual occurs during March – April each year.

The story goes that a group of cowherds found a rock in the forest that oozed blood. They realized it was a rock containing the power of the Goddess. When one of them touched it, he burst into flames and was reduced to ashes. Clearly only a woman could pick it up for the Goddess preferred priestesses over priests. But as there was no woman in the vicinity, and the boys felt such a powerful stone should not go unattended for long, they dressed as women and approached it. This time, no one got hurt. The Goddess enjoyed the men expressing their feminine side. She blessed them.

In memory of that event, to get blessings of the Goddess, even today, on a particular day, men dress as women and offer lamps, incense and flowers to the Goddess. These men are not cross-dressing, transgendered homosexuals. In fact many go to the temple in the company of their wives, sisters and mothers who help dress them up. It is all done matter-of-factly, though many enjoy the day of liberation from the burden of machismo.

In another ritual, the Karaga, in Bangalore and many parts of Karnataka, the Goddess is invoked in a pot (karaga). A young priest dressed in women’s clothes then carries the pot across the city. The Goddess is associated with Draupadi and the priest belongs to the warrior community, suggesting that this is a ritual designed to seek appeasement and forgiveness of the Goddess who was treated so badly by the Pandavas, who gambled her away to the Kauravas. As the Goddess travels atop her cross-dressing priest, she offers blessings to the houses and streets she visits.

In these rituals, the man’s sexuality is not in doubt. Nor is it being challenged. It is perhaps meant to get men to empathize with women who end up suffering greatly to uphold social values.

Unfortunately, worshipping the Goddess and asking her forgiveness, does not often translate into respect for women. The Goddess is equated with the fierce mother and very clearly distinguished from the woman who is seen as property and object of pleasure. The scriptures do not make this difference: she who is mother, is also wife and daughter. In wisdom, we do not seek property or domination. Until then, we will continue to control and violate the Goddess, like Ravan, and Duryodhan and the Pandavs, risking her wrath.