When the ascetic overpowered the nymph 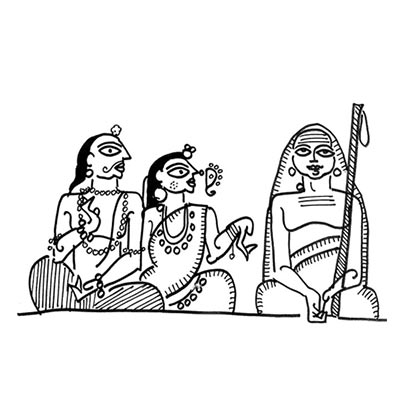 The earliest commentary (bhasya) on the Bhagavad Gita that we have is that of the great scholar, Shankara, who lived in the 9th century CE, 1300 years after the Buddha, at least 500 years after the final composition of the Gita. We must keep in mind that this is the view of historians. There are many who believe Shankara was a contemporary of Buddha and that the Gita is 5000 years old.

Shankara marks a period in history when Buddhism was on the wane, the Puranic Hinduism was at its peak, and Islam was making inroads into India via sea-faring merchants in the South and warlords in the north. By this time both Buddhism and Hinduism had transformed rather dramatically, the rivals influencing the other to the extent that they had started mimicking rather than opposing each other, so much so that it was difficult for the common man to distinguish one from the other. This transformation took over a thousand years between the time that the Greeks came to India (3rd century BCE) and the Muslims started spreading their influence (10th century CE).

Buddhism had transformed from the old school (Thera-vada) to the great school (Maha-yana), having embraced the householder’s way: the life-rejecting Buddha had become the multi-armed, multi-headed saviour known as the Bodhisattva. Stories of Buddha’s previous lives (the Jatakas) were told when he displayed disproportionate compassion to fellow beings under trying circumstances. Buddha had rejected wife, child and family for wisdom. But the new trend saw an increased comfort with the feminine. The goddess of compassion, Tara, who takes one towards completeness (Paramita), appeared sometimes independently as a Bodhisattva, sometimes in intimate embrace, of the stern and stoic Buddha, who was also being increasingly visualised as a graceful dancer bearing the lotus, or holding the very assertive masculine thunderbolt (vajra) in one hand and the feminine rhythm-indicating bell (ghanta) in the other.

In complete contrast, Hinduism, champion of householders, had begun valorising the hermit’s way, with celibate teachers (acharyas), Shankara included, choosing not to marry or distancing themselves from their spouses if married, despite living in temple complexes of Shiva and Vishnu whose weddings rituals were popular festivities. In fact, Shankara was even accused of being a covert Buddhist for he seemed to place greater value on the formless divinity (nirguna devata) of the mind, than on embodied gods and goddesses (saguna devata) enshrined in temples. Shankara saw Gita as the essence of Vedanta, Vedic philosophy that saw the sensual and the material as delusion (maya), rather different from Tantra, Vedic philosophy that saw the sensual and the material as power (Shakti). The episode of Shankara admitting his lack of knowledge of sensual pleasures and erotic arts to Mandana Mishra’s wife, Udaya Bharati, draws attention to the rising gap between the householder way and the hermit way in the Hindu fold.

The shift saw an increased discomfort with the feminine, that gave rise to the doctrine of purity and the most puritanical of practices that are inherently patriarchal, that amplified in response to Islamic and Victorian values, and eventually came to be qualified and classified as ‘Brahmanical’ by modern academia. Even today, Hinduism is seen more using the hermit’s gaze than the householder: the celibate ascetic is seen as superior to the dancing nymph. He who never has sex tells society what kind of sex is appropriate and good.