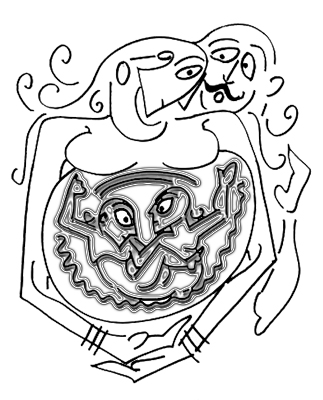 Brothers fight. In the Bible, Cain kills Abel. There is tension between Abraham’s sons, Isaac and Ismael, and Isaac’s sons, Esau and Jacob, and Jacob’s son Joseph and his many brothers over inheritance. In Egyptian mythology, Osiris is killed by his brother Seth and his death avenged by his son, Horus. In Greek mythology, Acrisius and Proetus fight when still in their mother’s womb. Remus is killed by Romulus shortly after the two brothers founded the city of Rome. The Hindu epics, Ramayan, Bhagavat and Mahabharat  are family dramas. These tales are a universal acknowledgment of sibling rivalry, something that is continuously being played out in the media: with brothers spraying each other with bullets, forming separate political parties or demanding a split of the father’s great business empire.

Quarrel between brothers, or sisters, become the stuff of ballads perhaps because we assume two siblings are not two human beings. Because they shared the same womb, the same home, the same family traditions, the same parents, we have expectations of siblings that we do not have of two strangers. Someone we expect them to be more accepting and accommodating of each other. It’s a bond of blood, we are told, because blood is thicker than water.

Traditionally, more than trust, people value loyalty. We expect our siblings to stand by us, no matter what. Greek epics speak of how Agamemnon got the Greek nations to unite and raise an army against Troy whose prince had abducted Helen, wife of his brother, Melenaus. On the other side, in Troy, Hector, is celebrated because he resolutely stands by his irresponsible brother, Paris, who gets Helen to elope with him. We admire Kumbhakarna for standing by Ravan, not Vibhishana, who moves over to the other side.

Loyalty makes us feel secure. But what exactly is loyalty? Is loyalty about love or power? Often the elder brother expects younger brothers to be loyal to him. But is that like a pack leader demanding submission of the pack? What makes the elder brother automatically the pack leader in human families? In nature, the older is not necessarily the leader; the strongest is.

We forget that humans are animals first, then humans. And in the animal world there is no such thing as sibling love, loyalty or rivalry. Every animal has to compete for resources. And this makes even brothers rivals. The same thing resurfaces in the human world. Every brother is an individual animal seeking his place in the pack. But then culture intervenes. With culture comes the notion of property. And the more property you have, the greater is your location in the pecking order. Laws determine proprietorship. Laws also determine inheritance. Laws also hope to determine relationship of elder and younger siblings.

In China, Confucius was very clear that the younger must always ritually submit to the elder, for the sake of social stability and order, and predictability. This meant the human mind had to tame animal instincts, and this is not easy. In the Ramayan, Vali uses brute force to establish his power over Sugriv, denying his brother access to both his kingdom and his wife. He is mocked as an animal, a monkey, who uses might to establish right. Human society frowns on this. We prefer seniority and pecking orders determined by law, not power. Some laws value seniority, some laws value talent.

In the Ramayan, we assume that Ram should be heir because he is the eldest son. But is that right? Is he more worthy? In the Mahabharat, neither Devapi (brother of Shantanu) nor Dhritarashtra (brother of Pandu) are allowed to be kings, despite being elder, on grounds that they have physical deformities; Devapi had a skin ailment and Dhritarashtra was blind. Is that fair?

Once Laxman, the loyal brother of Ram, complained to his brother, “I always have to obey you because you are my elder brother.” Ram responded thus, “In our next life, you will be the elder brother but you will still agree with me, not out of obligation or loyalty but because you will realize that all my actions are rooted in dharma.” And so Laxman was reborn as Balabhadra and Ram was reborn as his younger brother, Krishna. Krishna never obeyed Balabhadra but, after initial irritation, Balabhadra always understood.

Words like dharma, righteousness, justice, fairness, do not exist in the animal world. They exist in the human mind. We seek fairness. And here the trouble starts! Who decides what is fair? The elder brother or the younger brother or society at large? Is it fair to divide wealth equally between all children? Is it fair to exclude daughters from the inheritance? In  this word lies all quarrels. Often property becomes the surrogate marker of the affection showered by the parent on the child: the sibling who gets the lion’s share of the property is seen as the favored one. The other feels rejected and angry. Or the parent may give the lion’s share to the less successful one and the other will angry for being punished for being successful. From this varied human opinions stem our rage and our wars.

In the famous dialogue exchange of the Bollywood hit film, Deewar, the rich smuggler brother tells his brother, “I have a bungalow and cars and wealth. What do you have?” And the policeman brother says, “I have mother.” The audience explodes in appreciation of the younger brother, not realizing that how even the mother has now become a property over which the siblings fight. The ‘good’ brother does not see the pain of the ‘criminal’ brother, his desire for validation and inclusion. There is so much righteousness that there is no allowance for love or affection. And that is why the fights continue.