When a dog wept in Ayodhya 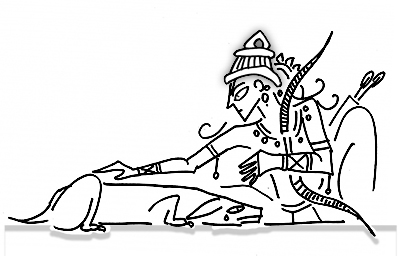 This story comes from Anand Ramayan, attributed to Valmiki, and written in Sanskrit in the 15th century. Long after Ram became king and all was well with the world, a dog came crying before Ram. He has been struck by a priest because he had licked food from the priest’s plate. Ram declared the priest guilty and  asked the dog if he had any particular punishment for the priest. “Make him the head of the temple.” Ram immediately agreed.

Everyone thought this was strange. The priest had wronged the dog and instead of being punished he had been promoted to the position of the head of a temple. What was the mystery?

Whether we believe in rebirth or not, we all know power corrupts. But when we think of power, we think of politicians or policemen. But that is not the only seat of power. We can see that in cricket, both in the players and the mandarins of the game. Old withered men clinging to power, transforming what is supposed to be fun and entertainment into a complex web of intrigue. And we see that in Bollywood, young starlets throwing tantrums once they become stars, actors who are humble before their break transforming into demanding monsters once they get their first hit. We see that in the corporate world, with CEOs behaving like Maharajas, treating their organizations as private fiefdoms, but spouting management mantras at all conferences.

Why do simple decent human being become corrupt? It’s a question that begs to be asked. Is it genetic, considering we do have concepts like sociopaths and psychopaths popularized by television serials? Is it about upbringing: denial of love and attention to children? Is it about too much wealth or too little wealth? Is it just our inability to cope with success? Is it the God-complex, suddenly believing that the world revolves around us? Is it the Devil-complex, anger at the world that has treated us as nobodies for a very long time?

At the heart of corruption is deep loneliness, a sense of feeling exploited and unloved. And so we strike back with a vengeance, hurt the world, before it hurts us, exploit the world before it exploits us. We want to feel safe. So we strike dogs accusing them of licking utensils. We play politics and do everything in our power to become heads of temples. We are just not able to sit back, relax and enjoy the abundance that nature very spontaneously brings before us.