Wheeling through Space and Time 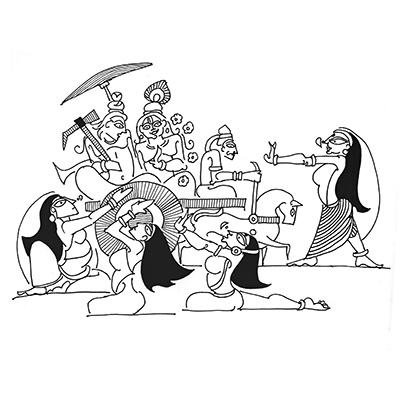 In philosophy, the wheel represents time as well as space. Time is constantly moving like a wheel. Time, in the Hindu, Buddhist, Jain scheme of things, is cyclical. The world is, according to Hindu, Buddhist and Jain mythologies, shaped like a disc that rests on the back of a turtle and is surrounded by oceans of milk and treacle.

The wheel also indicates the radial nature of Indian thought. The same idea (hub) manifests in different forms (spokes). And the same form (hub) can be interpreted differently (spokes) by different people (located at the rim). The center represents stillness and the elemental bindu from which all things emerge: it is the seed. The rim then is the manifested form, the fruit of the seed.

If the centre is Brahma, the creator, then the rim is Brahmanda, Brahma’s creation. If the centre represents zero, shunya or nothingness, then the rim represents everything-ness or infinity. The wheel then indicates mandal, the space created by the rim of the sky and the earth. It marks the frontiers of infinity. We can see in these ideas how the number zero acquired its shape.

The wheel starts appearing in some of the earliest Indian coins indicating royal status. Gradually we see a man carrying it. This is the Vasudeva of Jain mythology. Gradually it becomes the chakra of Vishnu, the regal form of God in Hinduism. He is Chakra-pani, he who holds the disc. This wheel whirs around Vishnu’s index finger and serves as a weapon, striking the enemy when hurled and then returning back to Vishnu’s hand like a boomerang. Vishnu uses this wheel-shaped weapon to help the elephant-king Gajendra escape the vicious jaws of a crocodile, who represents material attachment. Thus the wheel offers liberation or moksha. Krishna uses the wheel to behead Shishupala, who insults him many times. He uses it to destroy the city of Kashi that rises up against him and to teach the sage Durvasa a lesson in humility. Shiva Purana states that the hermit-god Shiva gave the wheel-weapon to Vishnu. Vishnu named it Sudarshan, a thing of beauty, whose rotating saw like action removes negativity and brings in positivity.

In the Mahabharat, the wheel serves as a weapon during the war at Kurukshetra. Abhimanyu uses it to defend himself from attackers. Karna is killed as he tries to free the wheel of his chariot stuck to the ground. In Jain Agamas, a rotating wheel appears before the emperor of the world, Rishabha, and then moves on to his successor, Bharata.

Temples in India often have the wheel motif. This is seen most spectacularly in the sun-temple at Konark Orissa, where the temple is visualized as the great chariot of the gods. Wheels of the sacred chariot of Jagganath in Orissa are objects of worship, for it is wheels that take Ram out of Ayodhya and Krishna out of Vrindavan; devotees hope that the wheels will bring them back into the lives of the devotees.