What You Need to Know About Buddhist Capitalism 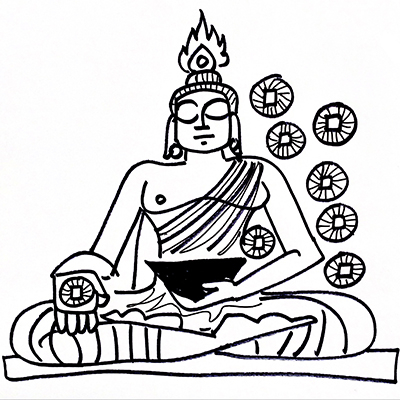 A thousand years before that, the trading routes across the world were controlled by Buddhist merchant kings. This is one aspect of Buddhism that has been obscured by European historians who since the nineteenth century have been more eager to project Buddhism as an otherworldly religion. In fact, Buddhism was the religion that contributed to the spread of mercantile networks and markets around the world.

It is said that when Buddha attained enlightenment, he was first fed by two merchants. The merchants were impressed by Buddhist wisdom but were unwilling to become monks. So, Buddha advised them to take care of the monks. As per legends, they were told that if they take care of monks and the monastic establishment, and enable the spread of Buddhist doctrine, they would earn merit. Merit would enable them to earn fortune and become prosperous. Thus, if one took care of the Buddhist order, it gave merchants the spiritual merits for success in markets. And this is the origin of Buddhist capitalism.

Originally, the merchants supported the monks by giving them food every day. Later, they gave them huge endowments which became Akshay , or eternal treasures. This was land which could be rented out and whose harvest was used to maintain the monasteries or financial capital. This capital could be lent to other merchants, in exchange for interest. Thus, through interest and rent, monastic orders became extremely rich and affluent. And this affluence begins in the Gangetic plains. It spreads across the Deccan region, then to Amaravati in Andhra Pradesh, and to Gandahar in Northwest India. From there, it spreads to southern India, Sri Lanka, Thailand, Burma, and Malaysia, and in the north, it spreads to Central Asia and hence to China and Japan. And wherever we find the Buddhist monks and the Dhamma spreading, we find the spread of trading networks, financial networks, and prosperity. All of this manifests itself in magnificent art, like the giant statues of Bamiyan of Afghanistan and the great Borobudur temple complex in Indonesia.

In many ways, it is linked to the Buddhist doctrine of Anatman. The doctrine that says there is no soul. The Hindus believe that everyone has a soul and our karmic bank balance forces us to follow a particular vocation, either as a Brahmin, a Kshatriya, a Vaishya or as a Shudra. The Buddhists did not believe in the concept of the soul and had a slightly different understanding of karma. Since we were not bound by any cosmic duty to our caste, every human being had the free will, to break free from the economic situation they were in and thrive as businessmen. To enable this they had to support the Buddhist monastic establishment. Thus a poor man could become a rich man through trade, and the trade would thrive if it supported the Buddhist monks. Such stories are found in the Buddhist Jataka, where we hear of beggars who become tycoons, by respecting the market and using their wealth to support monks.

This economic aspect of Buddhism is conveniently ignored by historians. They would rather talk about Buddha as a hermit who gave up all things worldly. But, in fact, the Buddha probably spurred one of the earliest prosperity theologies in the world.

This article is also listed under Buddhism