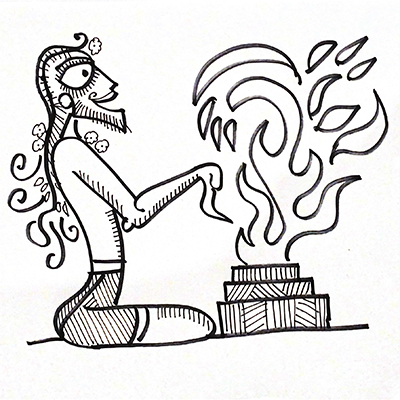 Harappan seals indicate that its residents worshipped trees, and holy men who lived in forests. There are were no temples in Harappan cities. The oldest of the Vedic scriptures, the Rig Veda, was composed 500 years after the collapse of the Harappan cities. It also does not refer to any temples. Temples appear much later in Indian history, after the composition of the Puranas, 1500 years ago, and are linked to a rise in feudalism and land grants. We can say that Hinduism has two halves: Nigama, without temples and Agama, with temples. This change is really about what Brahmins gave value to.

The Rig Veda is full of hymns that praise various gods, especially those associated with storms, the sky and sun, who never made it to temples. They were invoked through temporary fire-altars that were dismantled after the ritual, indicating these hymns and rituals belonged to a nomadic pastoral community who did not need a permanent shrine.

As the cattle-herding nomads settled down into an agricultural lifestyle, in the Gangetic plains around the Iron Age, ie 1,000 BCE, archaeologists have found painted greyware pottery, a shift from the earlier red-black pottery, but no sign of temples. This is when the Samaveda provided melodies for Rigvedic hymns. These melodies were classified as those for the forest and those for the field. The Yajurveda takes the mantras of the Rigveda and attaches them to rituals of kingship. The Rig, Sama and Yajur are the main Vedas, hence referred to as the triad or trayi in most literature. The Atharvaveda was distinct, more personal and related to health, birth, marriage and death.

The content of the Vedas indicates a shift from pastoral life in the wild to settled life around fields, and the rise of kingship and collaboration between diverse communities. The Yajurveda extended itself to manuals known as Brahmanas. Here, we find the first mention of the rivalry between devas and asuras here and the earliest stories known as itihasas. The itihasas explained how mantras are used to maintain balance between the gods, rishis and humans. They further explained how mantras can keep away negative forces, such as asuras and rakshasas. The Aryanakas referred to the rituals performed secretly in the forest, away from settlements.

Most Brahmins did not care what Vedic hymns meant and focussed on simply remembering the hymns, singing them and performing rituals. Others focused on the phonetics, etymology, grammar and poetics of Vedic hymns, and realised how sounds, and bricks, come together to create structures of meaning. Jyotisha-shastra became important to decide the time of rituals. Sulba-sutra gave rise to geometrical principles to design Vedic altars. The Srauta Sutra emerged explaining the large ceremonial rituals. The Graha-sutras explained the residential rituals. These included the maintenance of the three fires: One for the gods, one for the household and one for the ancestors.

In this period, we have the first Dharmasutras, that seek to organise life. Occupations are classified under the four-fold division (varna): The priests, the warriors, the peasants and the servants. This four-fold division of society is accompanied by a four-fold division of life (ashrama): When to study, when to marry, when to retire and when to renounce the world. The Dharma Shastras eventually became legal manuals that the Brahmins used to enable kings to govern the land. They seem indifferent to temples.

Then, around 500 BCE, came the Upanishads, later known as Vedanta, or end of the Vedas. While Samveda, Yajurveda, Brahmana and Aranyaka focus on prosperity and the tension between the forest and the cultivated fields, the Upanishads wonder about the nature of life (jiva) and what binds the world together. These ideas were created by tapasvi, or the meditating and wandering mendicants, some of whom gave rise to Buddhist and Jain monastic orders that completely rejected Vedic ritual. Buddhists and Jains first built monumental mounds for their teachers, which were precursors of Hindu temples. Here we find the first visualisations of yakshas and yakshis, spirits venerated by common folk; spirits who lived in sacred landscapes, trees and animals; spirits who would eventually become an integral part of Buddhist, Jain and Hindu mythology.

While the older Dharma Shastras refer to North India as Arya-varta (land of the noble people), the later Dharma Shastras refer to the entire Indian subcontinent as Arya-varta. Historians believed that 2,000 years ago, Buddhism, Jainism and Vedism began spreading south of the Vindhyas. And it is only in the south, in Tamil Sangam poetry, that we first hear of gods firmly linked to land and landscape. We hear of Seyon who lives atop mountains and Mayon who lives in the forest. We hear of Kotravai and her son, who lives in the wilderness. Indra, now, occupies the fields; Varuna, the sea. Very different from Vedic descriptions.

In the songs of Alvars and Nayanars, we hear of gods in temples. These gods were originally clan-gods (kula-devata) and village gods (grama-devatas) of the non-Brahmin, non-Buddhist, non-Jain masses, who eventually became deities of India’s grand temples identified with Shiva and Vishnu of the Puranic stories.