What They Don’t Tell You About Advaita 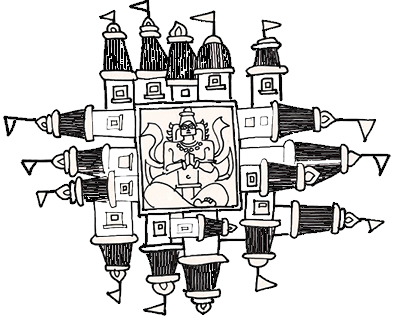 Who is a Hindu? What they don’t tell you about Advaita

Advaita Vedanta is the de facto philosophy followed by Hindutva. The reason for this is not spiritual. It is political. Advaita Vedanta says the whole world is a manifestation of the one and only God (brahman) and all diversity we see is delusion (maya) as the result of ignorance (advidya). This idea works very well when you are trying to unite various caste groups into one vote bank.

The idea of Advaita Vedanta being the foundation of Hinduism is relatively new, with origins in writings of the 19th and 20th century Hindu thinkers like Dayanand Saraswati, Vivekananda and Sarvepalli Radhakrishnan. They all lived in times where there was a lot of communal disharmony between Hindus and Muslims. Hindus were seen as divided and there was a need for a philosophy to unite everyone. Advaita Vedanta fit the bill.

Indian thinkers were, without realising it, also influenced by 19th century European orientalists, such as Paul Deussen, who were seeking an alternative to the Semitic monotheism. Advaita Vedanta of Adi Shankara seemed the right fit as it transcended Hinduism’s polytheistic paganism. Deussen did not realise there were many opponents to Advaita amongst Hindus, many who saw Advaita as camouflaged Buddhism.

The British constructed Indian history by saying that Muslims had come to India and destroyed all things Hindu. So by overthrowing Muslim kings they were actually rescuing Hindu culture. This idea meant all original and pure Hindu thought existed only in the pre-Islamic era, in the Vedas and the Upanishads. This idea was taken forward by Arya Samaj. It saw temple worship and Bhakti movements as latter day corruptions that emerged in the Islamic period. This privileged pre-Islamic ‘intellectual’ Advaita of Adi Shankara over temple-based devotional Vedanta, sidelining Ramanuja’s Visishta-Advaita, for example.

In Manusmriti, a nastika is one who rejects Vedic rituals, which includes marriage. Thus monastic Buddhism and Jainism were seen as nastika. Shankara was also seen by orthodox Vedic brahmins as a nastika as he rejected marriage. Hindu monasticism was permitted only after marriage.

But in the 19th century, nastika was taken to mean atheist. Rejecting Veda was equated to rejecting God. Vivekananda and Radhakrishnan saw Adi Shankara and his Advaita Vedanta as astika, theistic, just like Christianity. They did not bother with the older meaning of nastika.

Shankara’s writings do not link him with temple culture. His link to temples and pilgrimage are later traditions. Ramanuja, who established major Vishnu temples of South India, rejected Shankara’s idea that the world is a delusion. He valued the material world, and its many differences. The deity in the temple was seen as a real image of God (unlike how Hindutva sees a temple: memorial to a historical figure like Ram). Ramanuja used the temple as a fulcrum for economic, political and cultural development of the countryside. Few study his administrative skills, because he is categorised under ‘Brahminism’

Advaita followers will insist that they are not Shaivites. In keeping with their philosophy, they do not differentiate between Shiva and Vishnu and worship the two as the composite Shankara-Narayana, a deity popular in Shankara’s native Kerala. In Kanchi, said to have been established by Shankaracharya, the presiding deity is Kamakshi, a form of Parvati. In Sringeri, also established by Shankaracharya, the presiding deity is Sharda, associated with Saraswati, but the parrot in her hand links her to Parvati. Despite all talk of oneness, and non-duality, there is great rivalry between the Sringeri and Kanchi. Shringeri order of monks question the veracity of the claim that Adi Shankara established the Kanchi order of monks. Few talk about this outside Tamil Brahmin circles.

We are rarely told that the Vedic (Shrauta) Brahmins opposed Adi Shankara strongly because they saw his maya-vaad (delusion) and nirguna-vaad (formlessness) as no different from the Buddhist idea of shunya-vaad (nothingness). Many Brahmins referred to Shankara as crypto-Buddhist or the prachanna-buddha. Scholars have shown the many overlaps between Advaita and later Buddhist ideas. So now great efforts are being taken by Hindutva to prove Shankara lived before the Buddha. This is based on the lineage tree of Advaita gurus in Sringeri and Kanchi. Most historians argue that this genealogy is invented. Even the establishment at Sringeri can be traced to the 14th century, nearly six centuries after Adi Shankara’s lifetime. But Hindutva has successfully silenced and discredited all historians as Marxists.

Evidence-based historical accuracy does not matter in the Hindutva world, as it rumbles ahead with its political ideology. In Hindutva, Advaita remains the great philosophy that emerged with Adi Shankara, before the Buddha, that enables them to wipe out all differences and dissent.