What Lapis Lazuli Tells About the Power Establishment in Ancient India? 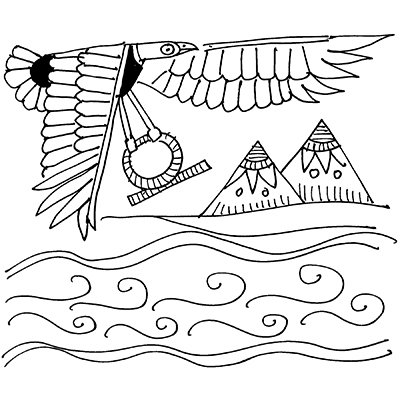 If one travels to a period nearly 5000 years ago, and goes to ancient Egypt, or ancient Mesopotamia (which is modern-day Iraq), we will find images of their gods and goddesses. These deities had blue hair, blue eyebrows and blue eyes. The distinct blue color is placed against gold or copper. It is the iridescent blue stone known as lapis lazuli.

Lapis lazuli is not found in Egypt, nor is it found in Mesopotamia. It is found in far-away Afghanistan.How did the stone travel across the Persian plateau and reach Mesopotamia and thence, travel to Egypt? More importantly, why did this happen?

It is now clear that lapis lazuli was not considered a luxury item in these ancient civilisations. But it was something connected with the gods. This is perhaps why we have the concept of “blue blood” being applied to royalty, who have represented gods on earth since ancient times.

In ancient times, people believed that the gods of ancient Egypt and Mesopotamia could be brought to life in temples. But this could only happen if they were made from rare precious materials found in faraway lands, like Afghanistan and India. So, trade routes developed. These connected Ancient Egypt to Levant (Israel) to Mesopotamia. From there on these were linked to the mountains of Turkey, rich in metal, to the coasts of the Persian Gulf. From there, they could travel along the coast to the delta of the Indus River Valley. It was from there that lapis lazuli could be collected, either in raw or its finished form.

The raw form would travel from Afghanistan down the Indus River to cities of the Harappan civilisation. This lapis lazuli would be turned into beads that would then make their way by ship along the coast, to ancient Mesopotamia, the land of Ila. Then, it would be taken to ancient Egypt, where the blue coloured stone would be used in the sacred rituals.

This data reveals to us how sacredness traveled from the Harappan civilisations to Mesopotamia. It shows the routes which connected Afghanistan to Mesopotamia via the coast of modern Pakistan. They were formed not just for trade and the demand for luxury goods as was previously believed. The belief in the sacredness of distinct materials was an important factor in the creation of these routes. The great trading networks of the Bronze Age were sustained not just by material demands, but also the spiritual demands of distant gods.

What is curious about the Harappan civilisation is that sacredness in Harappan civilisation was established not by accumulation of rare distant goods but by the very opposite. The society rejected things that existed in the neighbourhood. For example, despite close collaboration with Mesopotamia, Harappa did not adopt the cuneiform script, or its obsession with grand monuments and tombs.

There is clearly an imbalance of trade here. There were more goods exported out of Harappa than the ones that were imported. The imports were mostly consumables and nothing that affected culture. We find seals of Harappa in Mesopotamia, but not the other way around. The Harappans probably imported bitumen and wool which were used. They were not interested in an exchange of ideas and isolated themselves like hermits.

As now, since then, we find power in ancient India was established not by the accumulation of material wealth, but by the aesthetic denial of material development. That is why since ancient times in India, the hermit has had more power than any head of a religious organisation. This we realise by the export of lapis lazuli and in the absence of its use anywhere in Harappan cities.