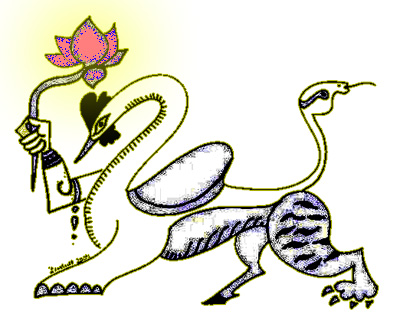 Suddenly this creature appeared before him. A beast that looked like it had been created by fusing nine animals — its head was a rooster’s, its neck a peacock’s. It had a hump of a bull and a serpent for a tail. Its waist was that of a lion. It had an elephant’s leg, an antelope’s leg, a tiger’s leg and a human hand. Arjuna thought it was a monster. He raised his bow ready to shoot this beast. Then he saw that the creature held a lotus in its hands. He stopped. What was this creature? He had never seen such a beast, something that is neither this nor that. A little bit of everything. Such a creature could not exist in nature, or could it? Maybe he had not seen it. Just because he had not seen it, did it mean it could not exist. He remembered what his friend, Krishna, had once told him. “Don’t be so arrogant to assume you know everything. The human mind is finite but the universe is infinite.” Arjuna lowered his bow and bowed his head. He realized this beast was no monster; it was a symbol of the divine. For what humans cannot dream of exists in the reality of God. This creature is called Navgunjara, the nine-part beast, and is described in vivid detail in Sarala Das’ Oriya Mahabharata.

Now compare this tale with that of the Chimera, a fire-breathing creature described in Greek mythology that had a lion’s body, a goat’s head springing from its back and a serpent tail. Sighting the Chimera was an omen of storms, shipwrecks, and natural disasters particularly volcanoes. Incidentally, it lived in ‘Asia’, was female, and was destroyed by the Greek hero, Bellorophon who rode the flying horse, Pegasus. Such was the impact of this monster that its name ‘chimera’ came to mean foolish fantasy.

In Indian metaphysics, purusha is the soul while prakriti is matter. Both are infinite and eternal principles but while purusha is still, prakriti is restless. Purusha is unrestrained by time and space while prakriti exists within time and space. Prakiriti is expressed as all inclusive and affirmative. Prarkiti is iti-iti, this too, that too, the very womb of infinity. A traditional Indian temple is an architectural expression of prakriti. All kinds of things embellish the faÃ§ade therefore — gods, demons, humans, birds, animals, flowers, fruits, plants as well as images of things unknown, even unimaginable. Lotus bearing nymphs stand next to goddesses drinking blood. Men and women engage in all kinds of sexual activities, some that boggle the mind. These coexist with images of domestic harmony and terrifying violence. There are creatures with the head of horses (Kinnara) and bodies of serpents (Nagas). There are deities with the head of elephants (Ganesha), horses (Hayagriva), bull (Nandi) and lion (Narasimha). The lines between animals and humans, men and women are blurred.This clearly is a message from the ancestors to break free from artificial human constructs, to shatter manmade boundaries. Perhaps it is this communication presented so creatively that makes Indians a bit more tolerant than people outside. After thousands of years, as a culture, we have understood that ultimately there is wisdom in accommodating everyone and everything eventually — even that which the British invalidated by calling ‘unnatural’.

Temple imagery and stories such as that Navagunjara are attempts to remind all humans to be receptive to the possibility that there exists in the universe things that we don’t see or know. Rather than judge and invalidate them, one has to appreciate and understand them. Many things may be socially discomforting, but nothing is unnatural and everything is a manifestation of the divine.