What Hindutva Doesn’t Get About Sanatan Dharma 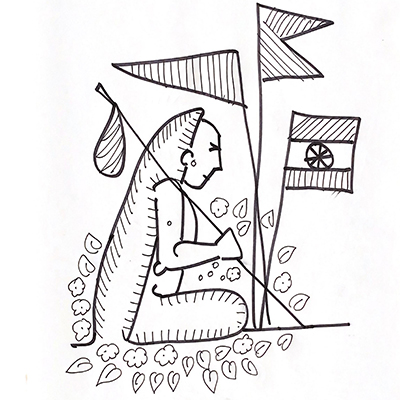 Sanatan means something that is timeless. Dharma in colloquial parlance is religion. It can also mean culture and civilisation. So, sanatan dharma can mean “timeless civilisation”. In the Gita, Krishna describes the knowledge he shares as sanatana, timeless.

Hindutva — a word that was invented in the late 19th century by Chandranath Basu — insists it is sanatan dharma, and so does not need reform. Chandranath Basu, like many Bengali intellectuals, opposed the social reforms spearheaded by the likes of Raja Rammohan Roy, who invented the term Hinduism in the early 19th century. In other words, sanatan dharma believers believe their customs and practices are timeless, perfect and in no need of reformation. This view denies Hinduism a history, and insists that Vedas existed always, and were not composed between 1500 BCE and 1000 BCE as historians argue.

In the early 20th century, VD Savarkar argued Hindutva is political Hinduism, beyond religious beliefs and customs. Its aim was to create an exclusive nation-state for those who saw India as the holy land. So those who believe holy lands exist elsewhere are not Hindus. In other words, Muslims who venerate Mecca in Arabia and Christians who venerate Jerusalem in Israel are not Hindus, as they do not venerate the rivers and mountains of India as holy.

In fact, they regard worship of India’s rivers and mountains as paganism, and the worship of ‘false’ gods. In the current political climate, sanatan dharma refers to Hindutva ideology. Anyone who argues otherwise is not welcome in Hindu rashtra. Unfortunately, these politically convenient definitions have nothing to do with Indian philosophy.

Every religion considers itself to be timeless. In Islam, God created the world and gave laws by which humans should live by. Thus Islam began when the world was created. Laws were transmitted through messengers. The law was reaffirmed on four times at least, via four major prophets: Moses, David, Jesus and Muhammad.

So, while historians will state that Islam emerged 1,400 years ago, in Arabia, Muslims will argue their religion is timeless and universal. While saying so, they will also insist that only Muslims, those who submit to God’s law communicated via the Qur’an, can enter Mecca. No one else. Veneration of Islamic holy men, the Sufis and the Ghazis, in dargahs across South Asia, is frowned upon by the puritans and seen as idolatry and worship of false gods.

The Gita speaks of the four-fold varna system. So technically, caste is a timeless idea reaffirmed by Krishna, and Manu. There can be no Hindutva without caste. This is what Ambedkarites refer to when fighting Hindutva. But historians have shown that caste does have a history — that endogamy emerged only 2,000 years ago, and not when Vedas were composed. It is the one-time when Hindutva tolerates historians.

Caste remains an essential ingredient of sanatan dharma, if one views Manusmriti that operationalised sanatan dharma as timeless and not a 2,000-year-old composition. The phrase used in Manusmriti, as well as in earlier post-Buddhist dharma-shastras, is ‘varna-ashrama-dharma.’

As per this code, it is expected to follow caste rules and the four stages of life. So as per sanatan dharma, not only must you follow your family vocation, and marry only within your caste, you also must produce children, raise them, and retire from household life to become hermit, when your children have children of their own.

If you become a hermit, without marrying, then you cannot be part of household matters. So technically, hermits cannot be politicians. Ram was married. Krishna was married. Shiva was married. Buddha renounced married life. The Jina Tirthankara renounced married life. But they did marry. Dharma-shastras, like the epics Ramayana and Mahabharata, were countering the monastic orders that emerged 2,500 years ago and were receiving the patronage of immigrant kings and warlords from the Sakas, Pahlavas, Yavana and Kushana tribes.

In fact, as per sanatan dharma, the River Ganga, the most auspicious river in India, exists to help the dead be reborn. It once flowed in the heavens but now flows on earth. Here, the ashes of the dead have to be immersed, and rituals performed after funerals, promising the dead that the living will marry and produce children. To not marry, to not produce children, is to fail in one’s duty to the ancestors. The only reason you have prosperity is to provide for children. If you have no children, you do not need property. You must renounce all material wealth and wander naked like an ascetic, breaking all ties with society.

These little details of sanatan dharma are ignored by Hindutva who like lawyers argue what sanatan dharma as per political convenience. What else can we expect from politicians who exclude women from the dais, unlike Ram, Krishna or Shiva.