What Ganesha Has to Say About Ambition 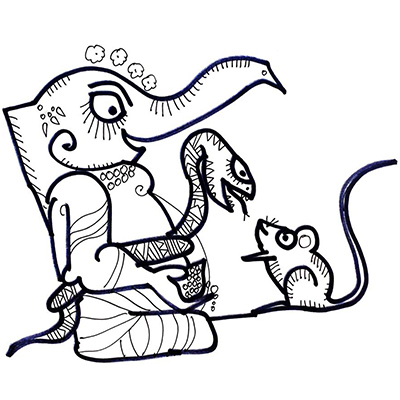 Ganesha, the elephant-headed god of Hindus, is renowned for his huge belly, which is a symbol of affluence and abundance. His elephant head evokes power. His vehicle, or vahana, is a tiny mouse, which is known to overcome barriers, and find its way into storehouses, find food, and hoard it. Rats are notorious to catch. But few notice that around his belly is a snake. Snakes eat rats. But Ganesha does not seem particularly afraid. In Ganesha’s hand Ganesha is a sweetmeat, called modaka, shaped like a bag of coins. Ganesha’s rat does not seem to be interested in nibbling a bit of that food.

So, we have before us an image of affluence and abundance indicated by the elephant-head and the potbelly. But we also have the image of contentment: the snake is not eating the rat and the rat is not eating the sweet. Ganesha seems to offer the moneybag shaped sweetmeat to his devotees with one hand. The other hand’s palm faces outwards and points upwards, which means, do not be afraid. Ganesha is thus a god who provides and protects, while being affluent, powerful, and content. He embodies the Hindu ideal of a yajaman.

The same idea is repeated in the popular image of Shiva and his family. Shiva sits with his wife, Parvati, and his two sons, Ganesha and Kartikeya, atop Mount Kailash. Each of the four deities are linked with various animals, their vahanas. Shiva has a bull, Parvati a tiger, Ganesha a rat and Kartikeya a peacock. Additionally, a hooded serpent is coiled around Shiva’s neck. Mount Kailash is made of stone and covered with snow. Not even a blade of grass grows here. What does Shiva’s bull eat? And why does Shiva’s bull not quiver at the sight of Parvati’s tiger? And why is Kartikeya’s peacock not attacking Shiva’s serpent and why is Shiva’s serpent not chasing Ganesha’s rat? Even here there seems to be no sign of hunger, total contentment. Ganesha’s belly reminds us, there is wealth here. Kartikeya’s lance reminds us, there is power here. Shiva’s ash-smeared body indicates he has no possessions, even though his wife, Parvati, is the lady of the mountains.

Both these artworks are showing a very simple idea. There is fear when there is violence. And there is violence when there is hunger. The act of feeding involves violence. In Shiva’s presence, no one is hungry. So, the tiger does not attack the bull and the bull has no need to graze. The serpent is not prey to the peacock nor predator to the rat. And the rat does not devour the sweets that Ganesha holds in his hand. Kartikeya does not need to use his lance to protect Ganesha’s sweets or Ganesha’s rat or Shiva’s serpent.

This image will not be part of management schools as we are told this is a religious image. But in fact it is an image to make students wonder about hunger, food and violence. Ambition is just another word for hunger, which makes us violent, combative, and competitive.

Unlike animal and plant hunger, human hunger is fuelled by imagination and is so insatiable. That is why the rich, powerful, and knowledgeable continue to be ambitious, rather than content. Business schools encourage people to stay ambitious; contentment is viewed as complacency, and laziness. Contentment is seen as destroying the drive and the motivation to generate wealth, power, and knowledge, we are told. Stay hungry, we are told. This fuels violence and the war-room culture around the world, where the rival is the enemy, and the customer’s wallet is the prey to be consumed.