What Are Upside-Down Ancestors Say About Justice and Dharma 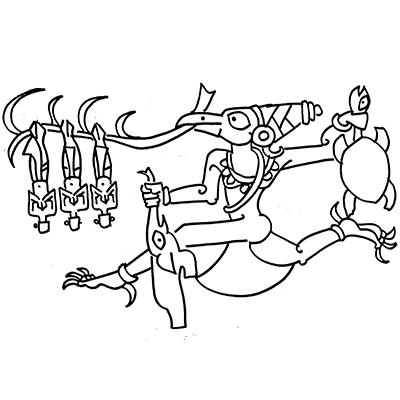 Though dharma is often translated as justice in modern translation, there is a fundamental error in such an understanding. Dharma presupposes karma, hence rebirth. Justice does not. In the dharma discourse, we are born with karmic debt that we have to either repay or reclaim. That is why there is diversity and inequality in the world. We work with this reality. In the justice discourse, we are born with a clean slate, as an equal to other beings. That we experience inequality around us is because some people have cornered all wealth and power, and that is wrong. In other words, dharma does not see inequality as injustice, but an outcome of past deeds, our own as well of those around us. Justice discourse seeks to repair this damage, solve this problem. Dharma discourse finds such an approach futile and foolhardy, as humans will never be at the same spiritual level. In the justice discourse, force will bring about fairness. In the dharma discourse, wisdom will make us realise how we can be fair, but we cannot force others to be as we are. This tension between material power based on justice discourse and spiritual power based on dharma discourse is found in the story of Garuda, the mighty eagle of Hindu mythology.

In his adventures, Garuda had travelled across three worlds, that which stands above the sky, that which stands below the earth, and everything in between, Garuda saw two things that intrigued him. First, a giant turtle fighting an elephant, who his father, Kashyapa, asked him to eat. Second, a set of men hanging upside down from a tree, who his father asked him to protect.

The turtle and elephant in Hindu mythology hold aloft the earth and are supposed to be symbols of stability. But in this story, they are identified as brothers fighting over property. Brothers fighting over property is a common theme in Indian as well as Middle Eastern mythologies. Ramayana speaks of the fight over property between Vali and Sugriva, between Ravana and Kubera. Mahabharata speaks of fight over property between Pandavas and Kauravas, and before them between Puru and Yadu, over inheritance. Garuda and the Nagas were brothers too; children of Kashyapa by his two wives. All living creatures in this world are brothers as we are all descendants of Kashyapa, our common ancestor, who is the son of Brahma. This makes earth our common inheritance. We feed on the earth. We feed on each other. Hunger becomes ambition becomes greed. We spend our lives fighting with brothers, seeking to overpower them, dominate them, annihilate them. We justify our violence against family by qualifying it as righteous. Right or wrong, it is violence. It fetters us to the wheel of rebirths, the world of bondage and suffering. And it distracts us from the big picture.

The sages hanging upside down from the branch of a tree direct us towards that big picture: the lives before birth and the lives after death. In the story, the sages are identified as Valkhilya, tiny insect-sized sages. So hanging upside down may be a metaphor for a pupa or chrysalis, from which an insect is reborn. In many stories, Rishis see visions of ancestors known as Pitr hanging upside down from a log of wood over a deep dark bottomless pit leading to Put, a hell for the childless. This is where ancestors go if the living do not give birth to children and enable the rebirth of those in the land of the dead. This is called Pitr-rin, or debt to ancestors, repaid by producing and raising children.

Focus on the fighting brothers draws attention to materialism, here and now. Focus on the suffering ancestors awaiting rebirth draws attention to spirituality, the idea of death and the hereafter. Thus Garuda is well-placed to unravel the greatest of human mysteries. Should humans spend their lives in the futile competitive quest to overpower brothers and be the dominant alpha? Or should humans realise the fragility of the present life and focus on the infinite expanse of previous and future lives? What happens to the dead after death? What happens to those who crave justice, and the unjust? Who had the answers? Vishnu, perhaps, for Garuda noticed Vishnu was always at peace, sporting an eternal smile, even as he engaged with affairs of the three worlds.

So Garuda asked Vishnu about life and death and from the answers was born the Garuda Purana.