Were Hindus Ever Invaders? 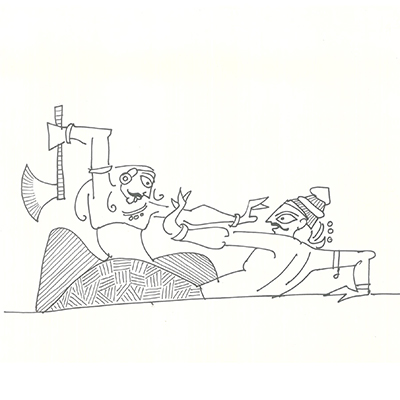 Hindutva keeps saying that Hindus never invaded foreign lands; that India has always been invaded. They speak mostly of Muslim invasion and ‘thousand years of slavery’ but rarely of Persian, Greek, Scythian, Kushan (Chinese) invasions that took place 2,000 years ago. And they completely ignore the invasion of Malaysia by the naval fleet of the Tamil Chola empire, in1068 CE (less than 50 years after Mahmood of Ghazni raided the Somnath temple) or claim Malaysia as part of ‘Akhand Bharat’.

Somehow internal invasions are not counted as invasions. No one seems to know of the Maratha attacks on Bengal in the 18th century that are part of Bengali folklore. Historians who do, are mocked and discredited as anti-nationals. Indian school textbooks are written to create a positive image of India in the mind of future citizens, just like British school textbooks never talk about the ugly side of British imperialism to make the British children proud of their country.

But folk epics and ballads retain stories of wars and battles between communities (castes) fighting over land, over cattle, over women. Brothers fighting brothers. Are these to be seen as battles between Hindus, before invaders came to India? Should these kavyas be part of popular conversations?

Tamil Nadu has the epic ballad of the eldest of three siblings (Annanmar Katai), the story of two brothers and a sister who are born at the same time, but are magically of different ages. The elder brother and his twin are much older than the young sister. The brothers have strength while the sister has spiritual powers. Together they have to continuously fight their cousins for control of land. This land was earlier granted to their clan by a Chola king. We also see the elder brother fighting the king himself, as well as forest dwellers. He also has friction with the local artisan community. In the end the brothers die defending what is theirs by right.

In Andhra Pradesh, there is the story of Katamaraju. It talks about the cattle community and about grazing rights. Katamaraju’s father is killed by a king over a dispute on grazing land. Katamaraju migrates south to the area around Nellore. There, he has a feud with the king of that region because he accidentally kills the queen’s pet parrot. The queen sends hunters to kill his cattle. The king accuses Katamaraju of not paying grazing tax to the state. This leads to a terrible battle between the king and Katamaraju.

There is also the Tulu story of Koti Chennaya of the Billava community, narrated in Karnataka. Admired even today, the two brothers’ skills in farming makes the king’s minister jealous and he floods their fields before harvest. In the fight that follows, the minister is killed and the brothers are forced to migrate elsewhere. Another king gives them land, but they kill a wild boar that a neighbouring king declares to be under his protection. War follows in which Koti is treacherously killed by an arrow shot from behind and a heartbroken Chennaya smashes his head against a rock and kills himself. The two brothers become guardian spirits who fight against injustice.

As we travel north and come to Bundelkhand, we hear the ballad known as Alha. It is the story of two brothers Alha and Udal whose mother belongs to a ‘lower’ caste. This is why when they accompany their friend, the prince of Mahoba, to fetch his wife, the bride’s father refuses to let his daughter go. The bride’s father happens to be the famous Prithviraj Chauhan, king of Delhi, who does not approve of the marriage. War follows. The son-in-law is killed. The daughter performs Sati. Udal is killed and Alha becomes a mendicant. Though the superficial reason for the war is caste and marriage, the deeper reasons are to do with territory, inheritance and tax.

Likewise, Pabuji’s story from Rajasthan refers to Pabuji’s niece being reminded of, and taunted by, her in-laws, of Pabuji’s boast during her wedding that he would fetch camels from Lanka. This forces Pabuji to travel all the way to Lanka and get the camels. While he is away, his cows are stolen by the wicked Jindrav Khinchi. Jindrav holds a deep grudge against Pabuji over hunting rights. In the battle that follows, Khinchi kills Pabuji and later Pabuji’s nephew avenges his death.

All these stories are less than a 1,000 years old and reveal Hindus fighting over issues related to land and cattle, much as we see today. We can argue that these are caste tensions and nothing to do with religion per se. But we certainly cannot blame foreigners for it.