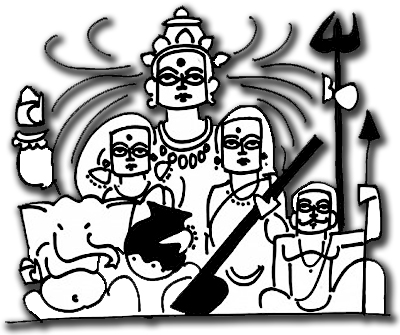 All Hindu pujas begin with avahan, the invocation of the deity by the devotee. He calls upon the divine to serve as the guest as he extends his hospitality.  During the puja, the guest is bathed, bedecked, served offerings of flowers, food, incense and the light of lamps. Finally, there is visarjan, when the devotee-host bids the deity-guest farewell.

But during Navaratri, the festival of the Goddess following the autumn harvest, in the eastern regions of Assam, Orissa and Bengal, the same ritual has an interesting twist. The deity is treated as the daughter, who is coming to her father’s house for a holiday, with her two sons and two daughters, taking a break from her husband. So traditionally, the songs are full of parental affection.

The daughter is Durga. The father is the local zamindar, playing the role of Himavan, the king of the mountains, father of Durga. The husband is Shiva, the hermit who lives in faraway Himalayas. The two sons are the fat and wise Ganesha and the muscular and strong Kartikeya. The two daughters are Lakshmi, goddess of wealth, and Saraswati, goddess of knowledge.

Durga is a warrior-goddess. She rides a lion, bears weapons and kills the shape-shifting buffalo-demon. And yet, during the festival, she is just a daughter, coming home for a break. The village that invokes her sees her as the daughter whose husband does no work and spends all day either meditating or smoking hemp or enjoying the company of dogs, ghosts and goblins, usually in caves and crematoriums, shunned by decent folk. They feel sad that the one who was raised in luxury has for a husband a man who does not live in a palace; he lives on mountains and does not bother to provide for her. Durga therefore ends up taking care of the family, feeding them as Annapoorna and protecting them as Chandika. Everyone feels sorry for the girl who is forced to fend for herself. But Durga bears it all stoically because she chose the husband on her own. It was after all a love marriage.

For three nights (saptami, asthami and navami), the princess who married the hermit-husband, is entertained with song and dance. She is fed the choicest of delicacies and given gifts of clothes and jewelry. The festivities reach a crescendo on Vijayadashami, after which it is time to bid her farewell. She has to go back, to her husband’s house, with her four children. When her image leaves the badi, the courtyard of the zamindar, the women of the household weep for the darling daughter who has to once again bear the weight of the world on her shoulders.

This visualization of a cosmic deity in human terms is typical of Indian festivals. Thus the village relates to the deity. Durga appears very much like the woman of many a household in India where the husband does not work and the woman takes care of the entire household. It is a social truth that is thus ritually acknowledged.