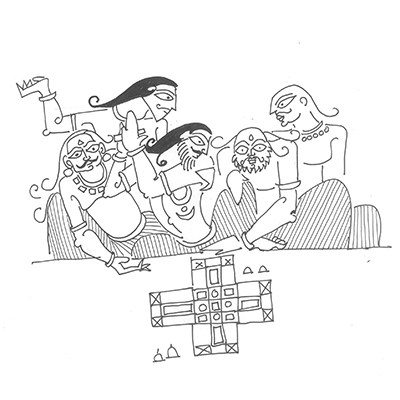 By Devdutt Pattanaik
31st May, 2019
The Economic Times

Many corporate houses love to have a ‘War Room’ in their office. It is a glamorous and much publicised thing whether you are planning a new strategy or have a special project that needs to be done quickly, often a turnkey project, a market intervention, even an emergency.

An interdisciplinary, interdepartmental room, where quick decisions are taken, as in a war situation, becomes the need of the hour. There are charts put on the wall, post-its everywhere, lots of pens, whiteboard markers, and intense discussions to win! But why is a war metaphor used for business? Why is business seen as war? Why does modern management valorise a violent mindset so?

The history of management reveals that modern ideas of management forces come from, primarily, two sources. One source is from military traditions, traced to the Roman army, right up to colonial times, when training and logistics evolved into a fine art to ensure victory. The second is from Christian missionary activities that measured the strategy, implementation and success of harvesting souls in different parts of the world. In both cases, one sees the language of violence: penetrating the market, grabbing a market share, dominating a market, crushing the competition, phrases we use, today, so casually.

Then one talks about what kind of a culture we are creating in organisations. An organisation which creates a war-room culture, clearly, celebrates violence. It is most interesting that the owners of such companies subscribe to non-violent religions, allegedly, and insist on vegetarian canteens. The idea of war and the thrill of defeating the enemy is exciting enough to become the easiest form of inspiration in the world. Politicians have figured it out long ago. Businessmen do it, too, where the competition is seen as the enemy. Victory is followed by largesse. We call it Corporate Social Responsibility.

Wars are of different types. For Greek mythology we have the famous Trojan war that was fought to get back from the rich city of Troy what they had stolen from Sparta, a queen called Helen. In that vein, we can have a strategy to reclaim customers that we thought were ours, or to reclaim talent that has been taken away by someone else. Then there is the Titanomachy, where the Olympian gods defeated the Titans, who had defeated the Giants earlier. In other words, a strategy to overthrow market leaders, through brute force (pumping in resources), trickery (manipulating regulations and policy) and ambush (surprising the market).

Another kind of war from the Bible is where the chosen tribe travels to the promised land and claims the land, because of God’s word, from the original residents.

This comes from a sense of entitlement, since it comes from God. So, it is you, basically, entering a hostile, alien market, and seeking space in that market. You have regulatory authorities, government and politicians working against you, while you try to penetrate this antagonistic ecosystem. This fills the war room team with a sense of righteous heroism.

The Mahabharata war is, of course, the war in which brothers fight over property. Each one thinks that the property belongs to them: this, we see, in a lot of business families. War room strategies designed especially with lawyers sitting there to divide the father’s property.

The idea of seeing business in violent terms is perhaps the reason why we see investment bankers being rather cocky, brutish and aggressive, revelling in irreverence, and why young MBA graduates are encouraged by peers to be brash and arrogant, trivialising the old school.

The idea of compassion and contentment is not taught in business schools around the world. That we are told is for losers, or after retirement, or for stress relief, like massaging warriors at night before they resume battle at dawn. Spirituality may value ‘letting go’, but motivational speeches in all corporates always speak of ‘never giving up, clinging on, no matter what’. And we expect our CEOs to care for the ecosystem or for rising inequality and unemployment?