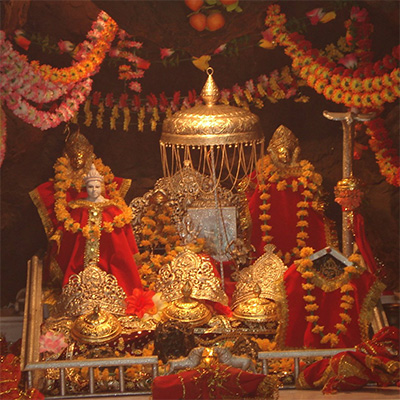 After a long crawl through a narrow cave in the hills of Jammu, you finally see Vaishno-devi embodied as three outcroppings of rock, draped with red cloth with gold tassels, flowers, with umbrellas hanging from above. The three rocks represent Maha-Lakshmi, Maha-Saraswati and Maha-Kali, the three forms of the Goddess. The air is rent with the jubilant cries of devotees, ‘Jai Mata Di,’ which is Punjabi for ‘Jai Mata Ki.’ It is important to clarify this as many assume that ‘di’ is a proper noun, a local name of the Goddess, rather than a preposition.

Vaishno-devi is now a very popular pilgrimage. She is one of the many mountain goddesses found in the Punjab and Jammu regions. Some identify her as part of the seven sisters, or seven maidens, who are part of Indian folklore, mysterious women who run in the forest, unattached to any man, and who can be dangerous if threatened and benevolent if appeased. The image of seven maidens has been traced to the Indus Valley cities. Who were these seven sisters? Are they the Matrikas, the female form of male gods: Shivani from Shiva, Vaishnavi from Vishnu, Vinayaki from Vinayaka, Kaumari from Kumara, Indrani from Indra, Varahi from Varaha, and Narasimhi from Narasimha? Are they the Pleiades constellation, the Krittikas, who collectively are known as the mother of Shiva’s warlord son Kartikeya? Were they once the wives of the seven sages, the Sapta Rishis? Were they ancient goddesses of the forest and rivers? In Maharashtra, they are known as ‘sati asara’, seven stones, worshipped by women who have trouble conceiving, and pregnant women who fear miscarriage, and women whose children have viral fever with skin rashes? We really cannot be sure. Textual references give us tantalising glimpses of a long oral tradition that simmers along the rivers and plains of India, whispered for millennia by common folk, who have either chosen to stay away from, or have been kept out of, orthodox Sanskrit Brahminical traditions.

What is most peculiar about Vaishno-devi, like many goddesses of Punjab and Jammu region, is that she is a vegetarian goddess. Typically, in Puranic and Tantrik traditions, the Goddess is worshipped with blood sacrifice. During navaratri, the festival of nine nights, celebrated in spring (vasant) and autumn (sharad) during which she battles asuras, she is offered the blood of buffaloes, and goats, and roosters. But not at Vaishno-devi, who is strictly vegetarian, an idea that may assume, even disconcert, a Shakta from Bengal, Assam and Odisha.

When the old Vedic ritual ways gave way to the Puranic traditions, two gods emerged who competed for supremacy: Shiva and Vishnu. Shiva embodied the monastic side of Hinduism while Vishnu embodied the householder side. Shiva challenges Vedic orthodoxy overtly. In his tales he beheads Brahma and Daksha. Vishnu also challenges Vedic orthodoxy, but covertly, as the royal Ram and the pastoral Krishna. Tensions rise between the two schools of thought. Shiva became increasingly associated with Tantrik practices especially the ritual use of alcohol and meat and sex, and Vishnu with milk, cows, vegetarianism and continence. Shiva’s followers speak of siddha, or magical powers obtained through yogic practices. Vishnu’s followers speak of dharma, or governance of society. Shiva withdraws from the world. Vishnu engages with the world.

It is the Goddess who reconciles the two deities. As Shakti she becomes Shiva’s wife, turns the fierce hermit into the docile householder. As Lakshmi she becomes Vishnu’s responsibility, forcing him to descend from his high heaven of Vaikuntha, and participate in human affairs as the avatars Ram and Krishna. These tales emerge about a thousand years ago and it is these cultural shifts that help us understand the shrine of Vaishno-devi.

For Vaishno-devi is identified as a princess from the south of India, who encounters Ram and wishes to marry him. But Ram is ekam-patni-vrata, faithful to a single wife, Sita. He tells her that he cannot marry her as Ram but in a future life will surely be her husband. So the princess moves to the mountain and becomes a hermit. She is sometimes identified as Trikuta, and sometimes as Veda-vati. Ravana, a worshipper of Shiva, tries to make her his wife, but she enters fire, and is reborn as Vaishno-devi, meditating and waiting for Ram to return as a future avatar of Vishnu. While meditating, she draws the attention of Bhairava, who follows the Tantrik rituals, and asks food from her. She feeds him. But for him ‘food’ includes sex (maithuna in Tantrik rituals). This, the goddess refuses. She informs Bhairava that she is waiting for Ram, and he should respect her wishes. But Bhairava refuses and tries to force his will. The Goddess runs and the path she takes is the path taken by pilgrims today. Bhairava pursues, fighting Langur-vira, the monkey-hero, who tries to stop him. Some people identify Langur-vira as Hanuman. Finally, exasperated by his pursuit, the Goddess turns around and takes the form of Chandi, the fierce one, and beheads Bhairava. His body remains on the mountain and turns into a boulder, still seen today. His head falls in the valley below. Bhairava repents and apologises for his transgression. ‘A son can be a bad son, but a mother cannot be a bad mother,’ he says. Vaishno-devi calms down and forgives him and declares that her worshippers will visit his shrine too, where his head will be worshipped, as it is even today.

Thus we see a story that involves the three streams of Puranic thought: Shakta, Shaiva and Vaishnava. Here the Shakta tradition aligns with the Vaishnav tradition of Ram, and shuns the Shaiva tradition of Bhairava. But eventually, all is reconciled. Bhairava is punished but also forgiven and finally venerated. This transformation of Bhairava is something that is unique to Hindu culture, where no one is ‘villain’ in the eyes of God. Everything changes – even those who ignore the consent of the Goddess are forgiven, and given respect, after due repentance and admonishment.