Vishranti, That State of Repose 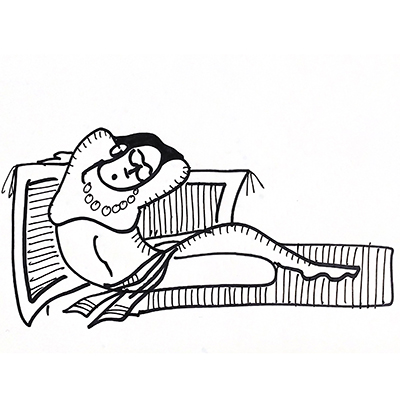 We spent our lives seeking opportunities to nourish our bodies and minds or defending it from threats. We seek food and pleasure and friendship and power and security. We also create things—goods and services and ideas and art. In other words, life is either about inputs or outputs, getting things or giving things, consuming, or generating, thinking about the self or the other, withdrawing in meditation, or engaging with the world outside. When does it all stop? Death? Why do we have this urge to be productive? What stops us from doing nothing?

Vishranti, or relaxation, is very different from having fun, from enjoying life, from pursuit of pleasure (kama) and consumption (bhoga). In Puranas, we equate Indra’s Swarga with the good life, the pursuit of pleasure, the state of having fun. But we equate Vishnu’s Vaikuntha with vishranti—lying on the coils of a serpent that floats on the ocean of milk, or on a fig leaf cradled by waves of an ocean, or on a swing, with Lakshmi, goddess of fortune, by our side, chewing pan, confident in the knowledge that the restless goddess is not going to run away, but is eager to be with us.

The insecure person cannot relax; Indra fears he will be attacked when asleep. Vishnu rests knowing that fortune will not leave him; Shiva rests indifferent whether fortune stays or goes.

In Ramayana, Kumbhakarna was offered a boon by Brahma, but a slip of tongue caused him to ask for Nidra (sleep) instead of Indra (dominion). Feeling sorry for him, Brahma said that he would wake up once a year and on that day he would be invincible. But he would die if he was awoken forcibly. Kumbhakarna’s brother, Ravana, was desperate to defeat Ram, who had invaded his kingdom. So he interrupted Kumbhakarna’s sleep. In the war that followed, Kumbhakarna was killed by the troop of monkeys (vanara) led by Ram.

In Bhagavata, we learn the story of a king called Muchukunda, who had fought besides Devas in many battles against Asuras. When asked for a boon, he said, he wanted to sleep and not be disturbed. Let the person who disturbs my sleep instantly burst into flames, he asked Indra. The boon was granted, and Muchukunda slept for thousands of years in a cave. Eons later, when Kalyavana attacked and destroyed the city of Dwarka, he chased its resident, Krishna, intent on killing him. Krishna led Kalyavana to Muchukunda’s cave, when the arrogant conqueror saw a sleeping figure, covered with yellow cloth. Assuming this was Krishna, he kicked Muchukunda awake and as a result burst into flames. Kalyavana, thus, paid the price of disturbing the vishranti of a tired king.

In the Mahabharata, we are told how Bhisma, the grand patriarch, is pinned to the ground by Arjuna’s arrows and forced to witness the fight between his grandsons, the Kauravas and the Pandavas. It seems like he is being forced to withdraw, let go, and rest, and allow the world to carry on without him. When we realise that the world need not be consumed, or controlled, or changed, we discover the magic of repose and rest. That is Vishranti.