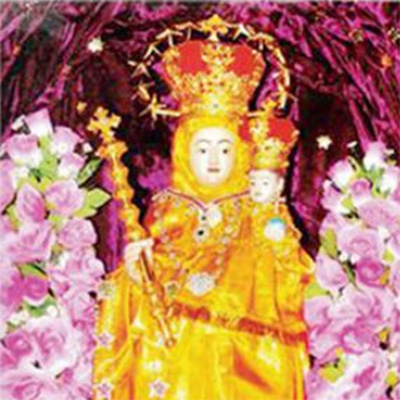 She is the Virgin Mary, mother of Jesus Christ, and she is draped in sari. Thousands of devotees throng her shrine at Vailankanni, in Tamil Nadu, deemed basilica by the Roman Catholic Church in 1962. They bow to her, stretch out their hands to her, lie on their face before her, crawl to her shrine, sing songs of her glory, weep in joy, shave their heads and offer her flowers, saris and candles as an expression of their devotion, for she is the Lady of Good Health.

The story goes that in the 16th century, a cowherd was on his way to the market to sell milk when he stopped to drink water from a pond and rest under a banyan tree. A woman appeared before him bearing a child in her hand and asked for some milk for her child. The boy gave her his pot of milk. After feeding her son, she returned the pot, thanked the cowherd, and disappeared. When the boy reached the market, his customers were upset because he was late. He apologised and told them of what he encountered. Then to everyone’s astonishment, the pot started overflowing with milk. This was no ordinary woman. This was clearly a goddess. The local Catholics recognised her as the Virgin Mary. A small shrine was built for her near the pond where she appeared. The pond was named Matha Kulam, or the Mother’s Pool, or Our Lady’s Pool.

A few years later, some say it was in 1597, she appeared once again, to a lame boy who was selling buttermilk on the roadside. She asked for some buttermilk to feed her child. After the child was fed, she asked the boy to deliver a message to a Catholic resident in the town of Nagapattinam, requesting him to build a church for her. But the boy pointed out that he was lame and would be unable to act as her messenger. The lady smiled and asked him to try standing up. To the boy’s surprise, not only could he stand, he could also walk and run to the town and deliver the message. The gentleman was in no doubt that Our Lady of Good Health was responsible for this miracle.

Finally, a group of Portuguese sailors on their way from Macau, China to Sri Lanka encountered a terrible storm in the Bay of Bengal and prayed to Mother Mary, promising to build a church for her if saved. They landed safely in the area associated with Our Lady of Good Health.

These three apparitions appeared in the same area where, today, stands the Gothic style Basilica that draws over two million pilgrims especially during her nine-day festival in August-September. The Mass is conducted in at least eight languages: Tamil, Malayalam, Telugu, Kannada, Konkani, Marathi, Hindi and English. People of all religions and castes throng the shrine whose divine resident is said to cure all ailments. This place is called ‘Lourdes of the East’, though in Lourdes, a village in France, Mary appeared to a local peasant girl only in the 19th century.

The festival of the virgin of Vailankanni involves hoisting of a flag on the flagpole before the church and ends with her crowning and her procession. Those who are cured of ailments often return with gifts of a sari, and a replica of the cured body part, made in silver and gold. For devotees, Our Lady of Vailankanni gives children to the childless, and finds spouses for the unmarried, and jobs for the jobless. She heals every wound, and wipes away all suffering. She understands the suffering of humanity. In art, she is sometimes shown with a crescent moon at her feet, complementing the sun, who is her son, Lord Jesus Christ.

The church brings together Catholic beliefs and many Hindu rituals. And though it may disturb a puritan, the local representatives of the Roman Catholic denomination respect the vast and intense outpouring of faith expressed using an Indian idiom. For thousands of years, Indians have been familiar with the idea of Amma, or mother-goddess who protects and provides for the village.

Across India, in almost every village, there are local manifestations of the Goddess, who help women bear children, who cure ailments and when angry, can cause plagues and epidemics. It is quite possible that before the shrine of Our Lady of Good Health, this was a local goddess shrine, either tribal, or Hindu, or Buddhist, or Jain, or all of these over centuries.

For in India, denominations may change, but the deity remains.

Christianity came to India 2000 years ago. According to local faith, it came to Kerala with St. Thomas, one of Christ’s apostles, the one who doubted his resurrection. It also came with traders from Egypt and Arabia. In the 15th century, after the Portuguese discovered the sea-route to Kerala, the Catholic faith thrived along the coasts. It is no coincidence that the apparitions of Mother Mary are dated to a century after the Portuguese’s arrival.

This connection to God through Mother Mary distinguishes Catholic Christianity from Protestant Christianity. The idea of the virgin being elevated to the status of ‘Mother of God’ was not accepted to all. But in pre-Christian traditions, divinity was often seen through the female form. While the male form offered salvation, the female form took care of health and home. We find this divide in Buddhism too, with the Bodhisattva speaking of enlightenment and Tara, the goddess born of his tears, offering compassion. Likewise if Vishnu of Shri Vaishnavism is associated with dharma (law) and moksha (liberation), Lakshmi embodies artha (wealth) and kama (pleasure). For many Muslims, the ‘hand’ of Fatima, the prophet’s daughter, is a good luck charm and protection from the evil eye. Naturally, every Indian is drawn to Our Lady’s basilica.