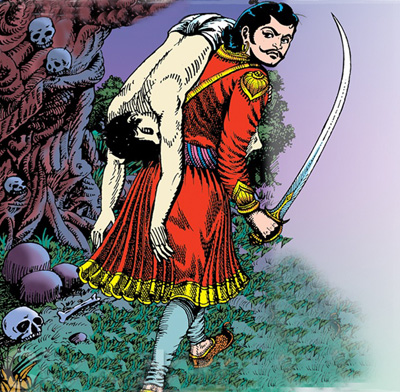 Vikramaditya, king of Ujjain, pulled down the ghost or Vetal who swung upside down from the branches of a tree that grew on the edge of a crematorium ground. “If you can bring this creature to me,” a sorcerer had told the king, “I can turn him into a mighty slave who will do all your bidding. But remember, while you are carrying Vetal, you must never speak. One word from your lips and he will fly back to his tree.” Vikramaditya swore, as he walked towards the tree, to keep his mouth shut. The Vetal did not mind this, more than happy to fill the silence with an entertaining tale:

Once upon a time, a king was performing the funeral rites for his father. As he was about to drop the funeral offering in the river, as ritual demanded, three hands rose from the water to receive it. The first hand belonged to a weaver, to whom the king’s mother had been forcibly given in marriage. The second hand was of a priest who loved the king’s mother and had made her pregnant. The third was of a warrior who had found the king abandoned on the riverbank and had adopted him and raised him on his own. “Now tell me Vikramaditya,” said the Vetal, “On which hand should the king place the funeral offering? On the hand of his mother’s husband, on the hand of his biological father or the hand of his foster father? On the hand of the weaver, the priest or the warrior? If you know the answer, speak and complete the story, or the sin of keeping a story incomplete will cause your head to burst into a thousand pieces.”

Can there an objective answer to this question? In modern times, a child’s father is determined by a biological paternity test but the results can be dismissed by the legal adoption process. In the Mahabharata, however, marriage was most important in determining paternity. That is why Pandu is identified as the father of the five Pandavas even though he did not make either of his wives pregnant.

The story of Vikramaditya and Vetal draws attention to the fact that in the world not every question has an obvious objective answer. Many questions demand subjective answers — a call. And the man who makes the call is the leader. He is Vikramaditya.

Ruchika is a Vikramaditya. She runs a chain of boutique stores selling high fashion. She has an immediate task at hand: to select a model who will appear in hoardings and print ads over the next six months. The budget is huge and before her is a complete SWOT analysis including the cost of the top models, the market perception of each of the models, their current brand equity, and future trends. Ruchika knows that in selecting the model, she will effectively be selecting the brand image of her stores. Does she want to continue with the image that exists? Does she want to change it? What will be the consequences of this creative decision? Will it change the quality of footfalls to the shops?  Will she get the teenage crowd or the family crowd? Her choice of model will influence many things. She turns to her finance team who give her the financial implications of her business decision — the optimistic and the pessimistic picture. There is no consensus in her design or sales team. For some the cool new model matters, others prefer the classical, and then there are those who want to be radical.

For all that talk about taking a decision as a team, Ruchika knows that ultimately she will have to take a call. If only she had the luxury of not saying anything. But then Ruchika realizes, she has not been made the head of the organization to keep quiet. She is the leader. She must use her intelligence and her intuition and arrive at a decision, howsoever subjective it may be, a decision that will affect the future of her company, her employees, her customers, her balance sheet and ultimately her own career. She must think, she must decide, she must speak. And her decision will not please everyone. They will oppose her, criticize her, pull her down when her decision does not yield the desired outcomes. She will have no one to blame, no one to hide behind. The buck stops with her. That is the price of kingship. That is the curse of Vikramaditya.

Vikramaditya always gives an answer but in different versions of the tale, the answer is different.  Sometimes, valuing social institutions as the key to social order, he chooses the legal husband, the weaver. Sometimes, giving due cognizance to caste hierarchy, he declares the priest as the father. And sometimes, valuing the role of emotions, he convinces himself and the Vetal that the warrior who raised the king is the true father. There is no right answer. There is no wrong answer. Everything depends on Vikramaditya’s values — what according to him is right, what according to him is wrong. Values determines the nature of Vikramaditya’s judgments and hence the quality of his kingdom.

If Vikramaditya believes that his judgment is objective, then he is only deluding himself. All decisions are molded by frameworks and contexts — all frameworks are constructed and all contexts are interpreted through the subjective lens. Data helps but to a point, not beyond. That is why we cannot have an organization without kings. Ujjain is a prosperous city because Vikramaditya takes the right calls, or rather he takes calls that he feels are right and which turn out to be beneficial eventually. That is why Vikramaditya is a great king. Every king can take a call — but only a great king can take calls that consistently yield the desired outcomes.

Right or wrong, Vikramaditya has to speak, and let the Vetal go, and start the process all over again. The day Vikramaditya has no answer, the fantasy of the sorcerer who will turn the Vetal into a a super-slave will take over and the reality of the brilliant king and his fabulous decision making abilities will come to an end.