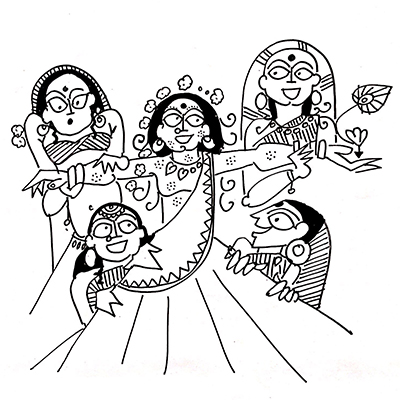 The corporate world is assumed to be masculine, one that needs to be forced to acknowledge the feminine and the queer through policies. But while the corporate world struggles to be inclusive, we see the opposite trend in the Hindu pantheon, as Hindutva becomes the governing political ideology of India.

Hindutva is trying very hard to redefine the Hindu pantheon. Traditionally, the Hindu pantheon focused on couples—god and goddess. Shiva with Parvati; Ram with Sita; Krishna with Radha. The mood is of affection, love, romance and of union. The god looking lovingly into the eyes of the goddess; the goddess looking back into his eyes. Each one understands the complexities of life. God represents human imagination and desire. The goddess represents Nature: plants, animals, the force of gravity, the power of hunger and desire. It is about the struggle to live our lives. These images emerged as a reaction to Buddhism.

Buddhism taught the world was miserable and the answer to life’s suffering lay in renunciation. In contrast, Puranic Hinduism insisted that life was wonderful. The solution was not in renunciation but in marriage. And so Shiva, the hermit, became a householder. Vishnu-Narayana woke up from his sleep and descended on Earth as Ram and Krishna, to be with Sita and Radha. The narratives are about household bliss and the issues dealing with being part of society. However, Hindutva bases itself on a very different enemy.

The enemy is no longer the world of renunciation promoted by the Buddhists. The enemy now is the world of effeminacy. The British projected the Hindus to be feminine. They had to be controlled by masculine Muslims. Thus, Hindutva is lashing back by creating a pantheon of men who are hyper-masculine and patriarchal. Hindutva fiction writers are promoting books whose covers represent men who have stepped out of a gym. They have a six pack, washboard abdomens and overdeveloped testosterone muscles. They constantly look angry. Even the goddesses hold sticks in their hands, ready to beat up someone. There is a celebration of violence.

You have Parshuram with the axe; you have Ram with his bow; you have Krishna with his Sudarshan chakra, not his ute. You have the Kalki avatar brandishing his sword; Durga with her trident in her hand. You will not find Krishna dancing, holding a ute, with Radha. You will not find Shiva lovingly gazing into Gauri’s eyes. Even the images of wise and powerful Hanuman are full of rage, ready to do battle at a moment’s notice.

This anger is Hindutva’s version of masculinity which it seeks to reclaim for Hindus. It was apparently denied to us by the British and what the Muslims stripped us of. This is classic male anxiety which equates masculinity with being a bully. Of course, if you ask them this, they will insist that their weapons exist in defence not in offence. These are very nice boys who love their mothers, respect their sisters and worship their wives. But it is never shown in art. You never see an image of a Hindutva man washing vessels and taking care of his wife. He never cooks food for his parents. He is constantly going to battle, with women serving solely as cheerleaders and cooking food for him. The women wait for him anxiously, until he returns from battle. The women are ready to valorously mourn the men’s demise, should they die in the battlefield. Even Bollywood under Hindutva control venerates women who wield swords or immolate themselves to save family honour.

The corporate world too, celebrates the masculine. Women who join the workforce are expected to wear black suits, just like men. Look stern, and aggressive. We are told that the corporate world is a masculine world where the marketplace is the battlefield and war rooms are where strategy is made. Even female TV anchors compete to be ‘as vicious as men’ to prove they are worthy of equal pay. A woman CEO is expected to look tough. She has to vanquish the competition. And emerge triumphant as market ruler. Is that healthy for the world?

Diversity is not merely about hiring differently abled people or people of diverse ethnicities, sexualities and gender and sharing posters of everyone laughing in an open office. It is about creating an ecosystem that challenges patriarchal norms: the love of triumphalist attitudes, the pleasure in destroying competition. It is about toning down the aggression and insecurity with femininity and queerness. It means not being embarrassed with kindness and generosity. If you think these are feminine or queer traits, not suitable for corporate mindset, you should know that you are part of the problem, and need to work on your diversity and inclusion.