View: How Rigveda Speaks of Aspiration and Collaboration 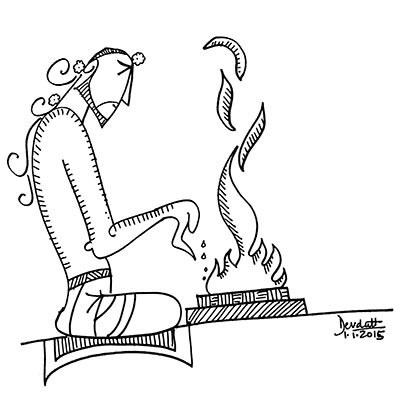 The Veda is not a single book. It is a corpus of knowledge, layers over layers of thought, expressed in hymn, melody, ritual and ideas, produced over forty generations, as the Aryas kept moving facing east (pranamukha) and turning clockwise (pradakshina), for a thousand years, from 1500 BCE to 500 CE, over a thousand kilometres, from Greater Punjab to Gangetic plains.

The Veda marks a transition from the horse-less world of the Harappa to the horse-pulled world of the Arya. The old rigid world of mercantile cities had been gone for at least four centuries before the first hymn of the Rig Veda took shape. And unlike the old grid-like world of brick cities, this was an agile world, constantly on the move as indicated by their portable ritual (yagna). The Arya did not standardize knowledge like the Harappans; they aggregated it, holding on to memories, even those of ancestors who long ago crossed rivers of Central Asia and saw Pleiades (Krittika) before sunrise during the spring equinox (2300 BCE). Even earlier maybe

Veda is special because while the Arya of Iran chose monotheism, the Arya of India made room for all gods (vishwadeva) Not one of you is immature, a child, and so all are worthy of praise and offering of Manu, you who care for the stranger, you who are thirty and three. Protect us, help us, speak for us, do not let us stray from the path of our fathers, the sons of Manu. You, who are all here, and belong to all men, give us shelter and protect our cows and horses.” (Rig Veda 8.30, paraphrased)

As they travelled the breadth of North India, the Arya mingled with other people, such as Dasas, Dasyus and Panis, sometimes fighting, sometimes collaborating, always learning. Nothing was rejected; everything was remembered. Hymns composed and compiled were eventually organised by Vyasa into the Rig Veda (collection of praise), which has over thousand hymns.

We invite you, Agni, god and priest of the ritual, to take your seat in front, towards the east, and enable this exchange. You are the bearer and giver of great wealth, praised by ancient and recent priests, through whom the gods receive the offerings of the worshipper and who brings the gods to the worshipper, and through whom one obtains great treasures, jewels, wealth and prosperity. You illuminate the night, as well as the one who brightens the mind with insight. You are the herdsmen of the world as it is. May you be as easily accessible as father to son and be a companion for well-being.” (Rig Veda. 1.1, paraphrased)

This became the last verse of the Rig Veda, that speaks of coming together and collaboration:

Over and over, fire-god, you gather what is precious for your friend. You who stand in the path of libation, bring goods to us. Assemble, speak together, let our thoughts agree. As gods once came together to receive their portion. Common in utterance, common in assembly, common in thought and feeling. I hereby utter a common purpose and make a common oblation on your behalf. Common is your resolve, your heart joined in one accord. United in thoughts, so that it will go well for you together.” (Rig Veda. 10.191, paraphrased) The beginning of the Rig Veda is personal and ambitious. It seeks to establish a connection with the gods through fire so as to obtain personal wealth and glory. The end is more social and collaborative. It invites all people to come together and collaborate with each other, as gods do. This is not accidental; it is clearly a design. Veda maps the journey of organisms towards maturity, from sprouting leaves for its own survival to producing fruits to enable the survival of others too, in an endless cycle of seasons.