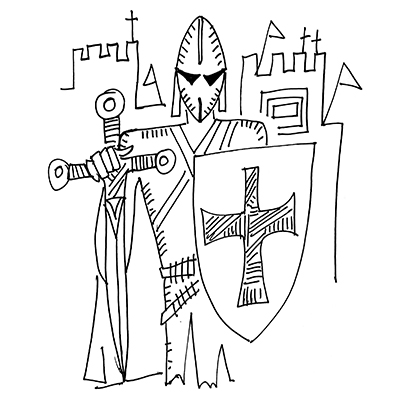 The Knights Templar was an order of warrior knights that existed nearly 900 years ago. It owed its allegiance to the Christian Church. In its 200-year history, it also established one of the first banking institutions in the world, before it was brutally suppressed by French king Philip IV. One of the allegations the king used to completely destroy this banking institution was ‘sodomy’. Other charges were that these monk-warrior-bankers were heretics and secret followers of Satan, and even Islam. The accusation of homosexuality allowed the king, who had an eye on their wealth and power, a moral high ground to destroy them completely, and get rid of his own debts.

The story of the Knights Templar reveals a lot about politics, economics and faith. In the 11th Century, the Roman Church declared war against the Muslims. For 300 years before that, the Christians and Muslims had lived in relative harmony, since the eighth century, when Islam originated in Arabia and rapidly spread overpowering Persia as a global power. But then the Seljuk Turks from the East conquered Jerusalem, destroying the Christian pilgrimage and trade routes to it, angering Christendom. Hence the Crusades.

The spiritual reason given for Crusades was to reclaim the Holy Land from the infidel Muslims. The political reason was to allow the Roman Church to extend its influence on the Byzantine Empire. The Byzantine Empire had distanced itself from the Roman Church and formed its own Orthodox church in Byzantium. Thus, the pilgrim route from Europe to the Middle East transformed into a military expedition.

It is during this time that the early forms of capitalism took place. Importance was given to trade, the service industry of pilgrim protection, trade routes and banking. The Knights Templar were ascetics as well as warriors. They offered their services to protect the pilgrims and traders on their journey to the Holy Land and back. So over 200 years, they were essentially mercenaries. They organised highways to protect people travelling from Europe to the Middle East. In exchange for their services, they collected money. Over time they became bankers; protecting gold and giving promissory notes. They also gave loans; they preserved documents. They became an extremely rich and powerful institution, a force rivalling the Church itself, and the kings of Europe.

By the 13th century, the Christians had been pushed back. Muslims had complete authority over Jerusalem. This is when the Knights Templar had an identity crisis. All the pilgrim routes and all their fortresses which were in the Holy Land were now in Muslim hands. They had no service to provide except banking. They could not motivate the Christians to rise up against the Muslims. The Christian kings wondered what would happen to their wealth mortgaged to the Knights Templar. Thus, it was very important for the kings to destroy this very powerful institution.

They did it by accusing the institution of heresy, of Satan worship, of being corrupted by Islam, and practices of the Muslim world –which included homosexuality.

Although Muslims and Christians worshipped the same God, and had common prophets, the Christians saw Muslims as heretics and Devil-worshippers. This is because the Christian world believed in celibacy and asceticism. The Muslim world did not. Jesus Christ was not married while the Prophet Muhammad had many wives. Muslims saw Heaven as a place of pleasure, and sensory delights, full of beautiful boys and girls (hurs and noors). So, it was a widespread belief in the Christian world that Muslims encouraged homosexuality, as well as sensuality.

There were many stories during the Crusades of young Christian boys being sold in slavery to Muslim Sultans. This was the Devil at work, said the Church. We see shades of this in current day arguments against Muslims around the world. It is during the Crusades that Islamophobia began.

By accusing the Knights Templar of being homosexuals, they were being equated with the Muslims, hence the pleasure-loving Devil. The ‘fake news’ helped the French king destroy this once powerful institution. Even today, we see propaganda, Islamophobia and homophobia applied to destroy political opponents. Celibacy and pleasure-denial continues to be linked with holiness and moral uprightness, even amongst those who position their insatiable lust for wealth, and power, as the more socially acceptable term of ambition.