View: Do Not Consume What You Protect 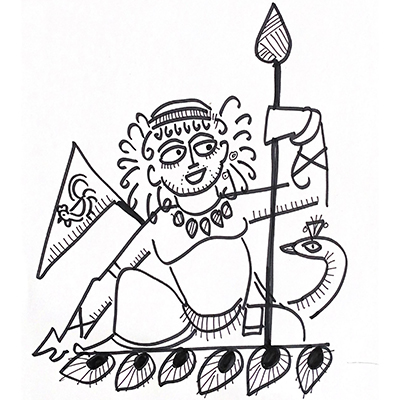 Four hundred years ago, the people of Kerala began telling the story of how Kerala emerged from a mysterious past. They spoke of how Parashurama reclaimed land from the sea and gave it to the Brahmins. But the Brahmins could not collaborate with each other since they were very competitive. So it was decided that they would import kings from lands beyond Kerala, to deal with matters of governance.

In other words, when the Brahmins enjoyed the acquisition of land, they couldn’t be trusted to protect the land rights of fellow Brahmins. For that, they needed kings overseeing all of Kerala. These kings were the Cheraman Perumal, invited from foreign lands, who would rule for a set number of years before being replaced by other protectors. A series of such protectors emerged.

The story goes that the final protector unfortunately began to enjoy the land that he was governing, which was against the rules. In other words from Rakshikuka, he becomes Anubhavikkuka. So he is asked to leave his kingship. He realizes that in no land is a king allowed to enjoy the land he protects, except in Islam. Thus, he converts to Islam. This is of course legend. It explains the peculiar kingship patterns that existed in Kerala. It also explains why Muslims claim that one of the rulers of Kerala was the earliest converts to Islam.

What is interesting here is the division made between protector and enjoyer. It is a point of note. Can those who are sworn to protect and govern the land enjoy the land? This is a very strong idea in the Vedas, it is the concept of Raja Dharma.

We find this in the story of Karthikeya. Karthikeya is the son of Shiva who is born to protect the Devas. He defeats Tadakasur and becomes the commander of the celestial armies. He helps them to protect their dominion. But then he finds the women of heaven, the wives of the gods, the dancing girls, attractive, and desires them. This alarms the women as well as Indra. Indra feels he will be replaced. If the protector starts enjoying everything that Indra possesses, then it is only a matter of time before the protector replaces him. Karthikeya will make himself another Indra.

So they approach the mother goddess, Shakti, Karthikeya’s mother, who promises to help them. Every time, Karthikeya goes towards a woman he sees the face of his mother in her face. This prevents him from indulging in his passions. Finally, he decides to become an aesthetic warrior. The aesthetic warrior code then emerged. Kartikeya became the patron of the ascetic warriors of India. They are the guardians of India but do not enjoy India. They will not enjoy or take part in indulgence. This is quite different from the politicians today who claim to protect India but whose sole aim is to enjoy its vast resources.

Karthikeya, thus, in North India is visualized as a great warrior. Here, he does not associate himself with women, but with war and is completely withdrawn. This form of Karthikeya did not become popular. Eventually, he was replaced by Hanuman who is the warrior ascetic. Like Karthikeya fights for Indra, Hanuman fights for Ram. But Hanuman does not seek anything from Ram’s dominion. He is a protector, not an enjoyer.

In later times, the kings of India started visualizing the mother goddess, Durga, as the protector of their lands. Being a mother, she would leave the enjoyment of the land to her children, and so becomes a protector, not an enjoyer. A theme that our politicians need to be reminded of over and over again.