Vegetarianism and the idea of untouchability 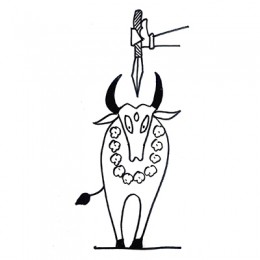 We overlook the fact that there are, at least, three types of vegetarians:

1. Those who are vegetarian for health reasons.

2. Those who are vegetarian out of compassion for animals.

3. Those who are vegetarian to purify themselves

These three groups are often confused.

The first variety has its roots in Ayurveda, which in spirit is agnostic about what we eat, astutely commenting on the impact of various foods on our physiology, recommending certain foods to combat illness, and even prescribing fish and meat, prepared in certain ways, in certain conditions, for certain professions. It is fully aware of the diversity in nature: that in certain ecosystems, such as in deserts and snow-covered lands, where there are not enough vegetables, physiology of local people adapts to harness nutrition out of non-vegetarian food.

The second variety has its roots in monastic orders and the concept of pacifism and ahimsa or non-violence. Jain texts speak of how Nemi-natha became a monk when he heard the piteous cries of animals that were being slaughtered for his wedding feast. Jayadeva’s Gita Govinda, written in the 12th century, speaks of how Vishnu took the form of Buddha out of compassion for animals that were being sacrificed in rituals. This second variety of vegetarianism equates eating meat with animal cruelty and thus — without meaning to — creates “inferior other”, offending Muslims who sacrifice goats during Bakra-Id, Americans who eat Turkey during Thanksgiving, Japanese who have always thrived on sea-food, Chinese and South East Asians who are devout Buddhists yet eat meat, to hundreds of tribal communities who have sustained themselves on game flesh and lived in harmony with their ecosystems for centuries. It ignores the inherent cruelty of agriculture that destroys ecosystems to establish fields and orchards and the many animals killed by pesticides and insecticides to get fresh vegetables and fruits and grain to our tables. Somewhere there is the belief that killing rats and spiders and caterpillars is not violence, killing goats, fish and cows is.

The third variety has its roots in the “cult of purity” that seeks liberation or moksha from worldly bondage by keeping away from, or cleansing oneself of, all burdensome contamination, such as dirt, alcohol, flesh and bodily fluids. Thus it recommends quarantining of “dirty people” which includes menstruating women, people in whose houses childbirth or death has recently occurred. This third variety of vegetarianism contributes to the creation of “untouchables”, those involved in “dirty” professions involving leather, dirt, garbage and dead bodies, and who are just too poor to restrict themselves to a pure vegetarian diet, who get their proteins from easily available, relatively cheap, innards of chicken and goat that the “upper” castes deem unfit to eat.

The third variety of vegetarianism contributes to the hierarchy of purity. That is why people who follow this form of vegetarianism crinkle their nose in disapproval and qualify those who eat meat and fish and eggs as “dirty”. And there is no embarrassment in calling others dirty because the rejection of the other stems from a kind of spirituality.

There are many forms of spirituality. The most popular form, in India especially, is the one that deals with the contamination. We want to cleanse the mind and the body of toxins. We want to rid the body of negative thoughts such as sex and violence. This manifests in customs such as celibacy and vegetarianism. So far so good.

But then comes the lethal side of these customs — their socialisation. Keeping away from others who do not follow similar customs. To be clean we have to identify and exclude those who we deem unclean. Thus those who eat meat are seen as unclean — their vessels are kept separate, they are not allowed to stay in the neighbourhood. Those who work with leather and deal with dead bodies are deemed unclean — made to stay outside the village. Those who menstruate are told not to enter the kitchen (we rationalise this by stating they are being given time to rest). Those who are told to clean our toilets are never allowed to use them.

In our desire to purify our gods and saints, we refuse to even indulge the possibility that Ram of the Ramayana may have eaten flesh of the deer he hunted in the forest. We are outraged at the suggestion that Buddha’s last meal may have been pork probably served by a “low” caste man. We get angry at the very suggestion that Sai Baba of Shirdi, of Sufi roots, would have allowed meat to be put in his cooking pot or that Kabir may have eaten river fish of the Ganga. We deny the Jain story that tells us that Krishna provided the animals for Nemi-natha’s wedding feast. We become vegetarian during Navratri during the festival of the Goddess who is described in the Puranas as Rakta-vilasini, she who delights in blood. We qualify the practice of cooking meat in many Hindu festivals by many Hindu communities as collapse of original Vedic culture and the influence of later Tantrik, Islamic, or colonial practices. We ignore the Vyadha Gita found in the Mahabharata where a butcher teaches Vedic wisdom to a hermit who has renounced sex and violence.

People are not content just following their choices. They want to convert others. And punish those who do not covert to their way. Rational explanations and scientific reasons are being dug out to justify the practice of purification and the demand for exclusion. We see toxins, contaminants, dirt everywhere — in food, in people, in art, in design. We want to be clean. Very very very clean. We forget the most famous vegetarian in the world, one who believed in animal rights and purity of his race — Hitler.