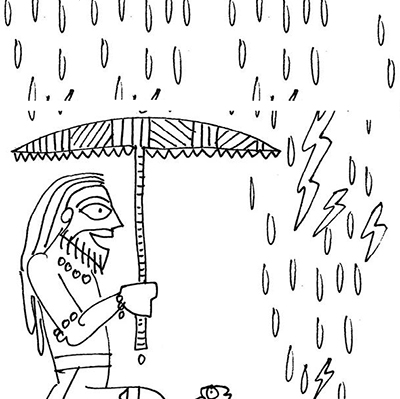 Parjanya is the Vedic god of rain and thunderstorms. We don’t remember him anymore. But Mandala 5, verse 83, is a beautiful song describing and praising him. The thunder and lightning that smashes trees are equated with the lashing whips of a charioteer. The rain is imagined as planting embryos of plants on the earth. He is imagined as a bucket of water upturned, who levels the highlands and the lowlands. He fills the watering holes and brings forth juicy pasturelands for the cows. But in the final verse, the poet asks the rain to stop, after he has done watering the earth, bringing forth plants, and inspiring those who watch him fall. Thus, this poem that is over 3,000 years old, composed in Vedic Sanskrit, captures the emotion of all people who love the rain, until it becomes unbearable, and then we want it to stop. In Mandala 7, there are more songs to Parjanya. There is a complex hymn 101, and a very straightforward hymn 102.

In the complex hymn, the rain-god is sexually ambiguous: sometimes barren, sometimes planter of embryos, sometimes called the father whose milk is consumed by the mother, to bring forth the son. He is the lord of the moving (animal) world and the immobile (plant) world. He brings forth milk and honey and embryos in all plants and animals. His celestial nature is celebrated by reference to three: three worlds, three stages of flowing water, three speeches, and even three buckets. In the straightforward hymn 102, honeyed oblation is joyfully made to the rain-god who fertilises plants, cows, horses, and women, who creates pastures and refreshes the earth. Following this is verse 103 of Mandala 4, where there is a vivid description of how the rain-god Parjanya revives the dried out frogs, causes them to bloat and croak, hundreds of male frogs who croak, like brahmin sons who repeat what their brahmin fathers tell them to repeat, and like priests who croak hymns in Soma rituals. The croaking gets them the mates, and they press forth the eggs, that creates new life, new prosperity, more cows and fertility.

Thus the poet, with a touch of humour, speaks of the life-giving nature of rain, and compares the rhythmic collective croaking of frogs as part of their mating ritual with the fertility hymn repetitively chanted by priests and the mimicry of their students and children. These vivid visual hymns remind us that the Rig Vedic poets were celebrating nature and transforming them into gods for the Vedic people. They were celebrating nature and venerating divinity at the same time. Poetry and metaphor is used to connect the physical and psychological world. Inspiration is used to evoke the gods. There is no real story to tell. Just a description of life, of nature. We can imagine the poets sitting under trees or in caves, watching the splendour of the monsoons, just as we do, loving its refreshing nature and yet fearing its intensity.