Varuna in Iran, Indra in India 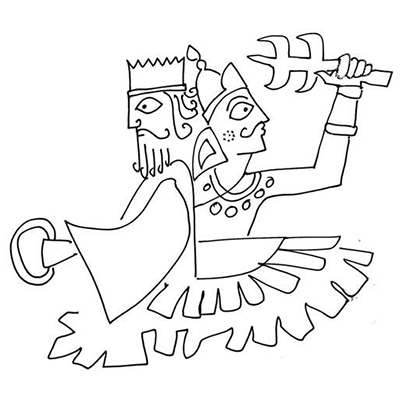 Varuna is known today as the god of the sea and Indra as the god of the rain. Varuna is associated with saltwater, located on the ground, and Indra is associated with freshwater, which comes from the sky. Varuna is the guardian of the western horizon, and Indra, the guardian of the eastern horizon. Thus, we see a tension between the two deities in the Puranas. It is further amplified when we hear that Varuna is Lakshmi’s father while Indra’s wife, Sachi, is a form of Lakshmi.

This tension between Varuna and Indra is an ancient one. In the Rigveda, Varuna is a god associated with order and morality, and is often seen together with Mitra, who was identified as an asura. This Vedic asura is not the same as the Puranic asura. In Vedic times, an asura was a deity, no different from a deva. The division emerged later, clearly.

Indra is a warrior god in the Vedic pantheon. When one reads the Rigveda, it clearly valorises Indra, in his warrior mode. In fact, Indra and Varuna are seen as the two aspects of kingship: the aggressive aspect and the ethical aspect. The Rigveda extols the warrior Indra far more than the ethical Varuna. Quantitatively, the major portions of the hymns in the Rigveda are dedicated to Indra’s success in battle, as he defeated demons such as Vritra, Dasas and Panis.

The Rigveda is said to be the contemporary of an Iranian document known as the Avesta. In the Avesta, we find a very different picture. We find a deity known as Ahura Mazda, clearly identified with Varuna, the god of moral order. Later, in pre-Islamic Iranian and Persian folklore, the word for demon is Dew or Daeva (from Deva) and for god is Ahura (from Asura), which is the complete opposite of what we find in the Puranic traditions.

The hypothesis is that about 5,000 years ago, people migrated from Eurasia towards the east and the west. The western branch is the European branch. The Eastern branch was very distinct from the European arm. They valued fire rituals and an intoxicating hallucinogenic drink. This Eastern split into two: the Iranian branch and the Indian branch.

The fire ritual is known as Yagya in the Rigveda and the Yasna in the Avesta. The sacred drink known as Soma in Veda and Hoama in Avesta, identified with a mushroom, found not in the plains of India or Iran, but in the mountainous regions where these Indo-Europeans lived, before they split into two groups.

The group which valorised Ahura tilted towards monotheism, and rejected Indra and Devas, and came up with the idea of heaven and hell. The group that shifted towards India moved towards polytheism and pantheism, in which every god is given its place, at different times. Here, Indra triumphs over asuras. Thus, we find that Varuna and Indra were treated differently in India and Iran (a country named after Aryans) and it indicates a shift in thinking not just among the Aryans, but in the whole world.