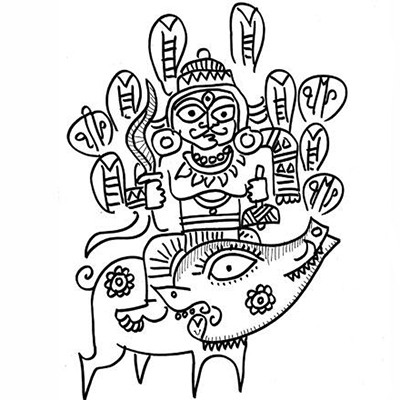 Considering these two factors, when humans look for help from the divine, they primarily are seeking two things: food and security. Therefore, most gods in India will have a hand, pointing upward, with its palm facing forward, and a hand, pointing downward, again with its palm facing forward. The palm, pointing down, represents Varadamudra, which means ‘I will provide food’, it is commonly seen in goddesses, such as Lakshmi, and the palm, pointing upward, represents Abhayamudra, which means ‘don’t be afraid’. Basically, we are talking about a god who protects and provides. We seek the provision of food, clothing, shelter, intelligence, wisdom along with protection and security.

This manifests in village gods. All village gods can be classified into two groups: fertility gods who provide children and food, and guardian gods who protect the village. They will be either male or female. The female deity represents fertility and she will be shown with a pot in her hand. The pot represents a womb, overflowing with grain, gold, food, and water. It is called the Purna Kumbha: the pot of prosperity.

In many places, the goddess is spread-eagled, exposing her female genitalia from which all life comes from. We find such images, even in the Harappan civilisation, indicating their primeval nature. The male figures usually appear as warriors, shown with swords in their hands, holding also the heads of slain enemies, sometimes riding horses, accompanied by wild hunting dogs. They are the guardians of the village. Sometimes, the goddess is also the protector and is shown with the trident or a sword in her hand. The guardian god can also be a fertility god, indicated by an exaggerated penis.

Across India, we find these two kinds of images, guardian deities and fertility gods. Sometimes, they are aniconic, i.e., they are just pieces of stone kept on the outskirts of the village. Sometimes, they are elaborate, carved stones of the gods, called hero stones. Hero stones commemorate people who died defending the village or cattle. These memories form beliefs that the ghosts of these powerful beings protect the village. Likewise, women who die young or at childbirth are transformed into goddesses and their spirits are believed to protect the village from disease and epidemics.

Every village in India has a gramdeva or a gramdevi or both or a fusion of the two images. They are worshipped, especially when people get married. These are a local manifestation of the cosmic divine, as per Hinduism.