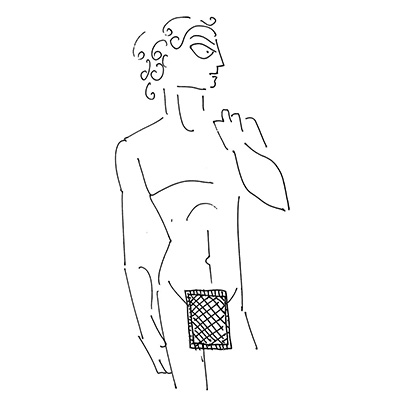 A few decades ago, the statue of Bahubali, a sage from Jain lore, was being installed right in front of Mumbai domestic airport. Many protested, arguing that the image of a nude man should not be the first thing people see when leaving the airport. In response, the middle portion of the image was covered with a panel. Eventually, the statue had to be removed. The idea of seeing Bahubali’s image as that of a nude man disgusted the faithful, for it transformed an asexual transcendental symbol into a sexualised biology.

Human beings are meaning-making animals. We can bestow meaning to sound, or to a stroke of a line and thus create words. We can bestow meaning to images, or to a gesture and thus create symbols. We can create layers of meaning by which a tree is not just a tree, and a cigar is not just a cigar. So it is with nudity. Depending on the gaze, depending on the context, it has a different meaning. It can be asexual or sexual, a celebration of the flesh or an indicator of something spiritual. The difference is evident when we compare and contrast the 14-feet-tall marble statue of David, carved in 16th century Italy by Michelangelo, with the 57-feet image of Gomateshwara Bahubali carved in Shravanabelegola, in Karnataka, in the 10th century.

In the Bible, humans were naked in Eden when they were innocent, but when they ate the Forbidden Fruit they became aware of their nakedness. And so they covered themselves with leaves. Any act of nudity after this Original Sin, and the subsequent Fall from the grace of God, is deemed vulgar, even offensive. In the Old Testament tale of King David dancing naked before the Ark of the Covenant evokes much outrage, with many people arguing he should not have done so, or would not do so, as such dancing is disrespectful, seen only amongst pagans. Yet, Michelangelo carves this very same David, in his younger days, when he defeated the giant Goliath, in the nude, in the style used by ancient Greeks to depict heroes such as Perseus. The polytheistic ‘pagan’ Greeks celebrated the flesh and the human form. In the age of the Renaissance, when Greek thought was being rediscovered, the male nude was no big deal, as it would have been one in the previous Dark Ages. In fact, no one saw the nudity of the statue when it was unveiled. The focus was on the statue’s remarkable self-confidence, concentration, beauty and grace.

Carved five centuries earlier, the gigantic Bahubali embodies the struggle to break free from the material world. He stands tall, looking at the horizon, vines wrapping around his calves and thighs, indicating both the duration of his struggle as well as its earthly nature. He is neither a Tirthankara like his father, nor a Chakravarti like his brother. He is between, sage and king, earning the empathy of lay followers of Jainism’s Digambara order. Here, the nudity embodies renunciation, and has nothing to do with male beauty or power.

How we see the male nude ultimately is both a function of our own conditioning, our own education and maturity, as well as the culture we live in. Neither of these images would be welcomed in most Middle Eastern countries, notwithstanding their gender, or their refined meanings.