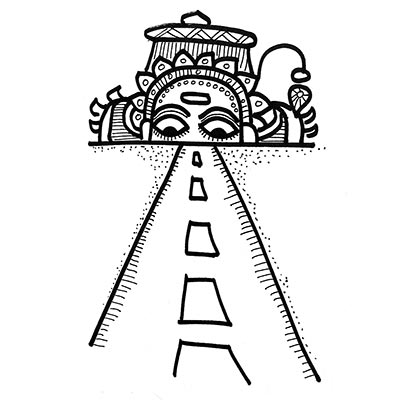 Statements like Indians are bad planners and need to be ‘educated’ reeks of racism, cultural chauvinism and lack of perspective. It stems from the assumption that planning is a good thing for all. But is it? Unless we question fundamental assumptions we will never be able to go to the root cause of this behavior. Let us not call this a problem. As soon as we call this a problem, we will evoke defensive behavior and that is not what we want.

The tendency to look at life as a problem that needs to be solved is a very modern American concept, rooted in the savior complex, whereby we see ourselves as Hollywood superheroes who want to save the world from problem-creating villains. It is a mindset that makes its way to various organizations, via various B-schools where American thought dominates the curriculum. In this mindset, those who do not agree there is a problem are seen in pathological terms: they are in denial!

One can argue that India is no longer significantly Buddhist and most countries of the Far East and South East are. But these countries are also influenced by the Chinese Confucian tradition, Singapore being the best example, where the Emperor is bound by the Mandate of Heaven to create order in the land through rituals and processes and systems. Planning becomes essential here. The Chinese court was for centuries controlled by careful planning of a vast series of complex rituals that everyone adhered to.

Indian society, by contrast, was caste based and every caste was essentially a professional guild (the politics and hierarchies notwithstanding). Everyone was expected to follow their community trade. Every community lived together, in relative isolation, mixing only in markets and during festivals. So the ‘community’ spirit was created not by ‘common law’ but by ‘common tendency to isolate oneself’ in one’s group. Every group had its patriarch who directed everyone how to function. His plan was executed. Thus we see great planning and execution in caste based events and institutions. A Hindu temple complex, managed by priests, is highly organized and based on careful planning. Trading communities are highly organized and plan rather well. Planning is part of the community process; it’s not a virtue of being a human being. Democratic institutions destroy the community structure, and expect humans to give up centuries of caste mindset.

Indians usually make great plans, but they are rarely implemented well, if implemented at all. For execution of a plan means respecting a plan. In the Confucian way, respecting authority is the sign of being civilized. In the Abrahamic way, one is expected to follow the word of God if one loves God, as we see in the value placed on obedience of the Catholic Church that controlled Europe for a thousand years, and in the importance given to submission in Islam.

In India, the only authority that is respected is the authority of the clan: the guru, the elder, the patriarch, or the mother. No one else, certainly not a democratically elected leader, or a boss in a corporation who does not actually pay the salary but is actually as much as servant (naukar) of the company as we are. In modern professional institutions, there is no clear master (malik) and this makes things even more confusing for a country that is used to working in family owned businesses where authority is clearly located.

Everybody is India is told that God is inside you, which means everyone can be imaginative and find an ‘upaay’, a better way, a bypass that creates a short cut, or do a ‘jugaad’, work smartly. When everyone creates a short cut, when everyone is bypassing smartly, without perspective of the larger picture, it’s a question of time that the blueprint collapses. And then work gets done only when the patriarch establishes authority by screaming and shouting at the last minute, which is how much of things in India gets done.

In a society with many variables — economics, political, social, education, caste, religion — creating a blue print that satisfies all is especially difficult. We forget that planning demands violent enforcement, suppression of voices of dissent once the plan is agreed upon. But in a country with so many minorities, it is tough to get consensus. Collaboration becomes tough and hence those who want to get things done either work at small community levels or turn dictatorial in exasperation. India’s scale and diversity creates complex governmental structures and departments, which rarely talk to each other. All these demand an extremely high level of patience to execute a plan.