Trishanku in America or those betwixt and between 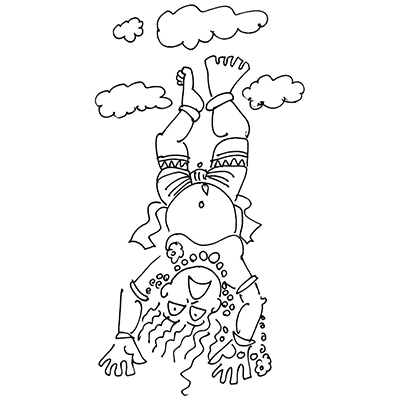 Trishanku is a famous character in Hindu mythology who hangs upside down between heaven and earth, belonging nowhere. Many (not all) American Hindus find themselves in the same precarious position. Officially American, owing allegiance to the American President, they passionately cheer India’s communal politicians, despite having absolutely no voting rights, or any skin in the game in the reality of India. They insist from the comfort of their homes in New Jersey and San Francisco they understand India’s problem better than any native Indian, and confidently offer simple (often stupid) solutions to India’s very complex problems. It is a symptom of not feeling they belong in their adopted homeland, yet unable to return ‘home’.

In the 1980s, Indian school students were encouraged to write essays on India’s Brain Drain: the phenomenon of the brightest Indian minds who after graduating from the best Indian institutes migrated to United States at the first opportunity for better prospects. This was an economic migration. But it was passed off as a political migration.‘We never abandoned Bharat Mata; it was escape from Socialist India to Capitalist America,’ they tell their children who subjected to their parents’ relentless glorification of India demand to know, why they left India in the first place.

This problem is not restricted to Hindus, or Indians. It is seen among most migrants from underdeveloped economies from Africa, Eastern Europe and Asia to developed economies of America and Europe. At the recently concluded Mumbai International Queer Film Festival, Kashish, the documentary ‘Abu (Father)’ by Arshad Khan told the story of a Pakistani-Canadian family, and how the parents who were liberals ‘back home’ ended up submitting to the most fanatic form of Islam in Canada , a land that welcomed them, offered them all manner of economic opportunities, but where they felt emotionally disconnected and culturally isolated. Reduced to inferiors in the new homeland, they reclaimed superiority through radicalism and puritanism.

The same thing is seen among many American Hindus. People who were never particular interested in Hinduism or Indian culture before they migrated, enthusiastically and aggressively embraced a very dark form of Hinduism that was against all things modern, from feminism to social justice to LGBT rights. In the ‘real’ India, they tell their children and grandchildren, women knew their place, the poor were adequately subservient, and gay people did not exist. It was a land where everyone spoke chaste Sanskrit, and discussed nuclear weapons, aeroplanes, plastic surgery, and Internet, before the arrival of the Muslims a thousand years ago, Christian Europeans two hundred years ago and Nehru, who chose to be secular, denying his Brahmin roots. Such tales are being legitimized by religious leaders, who have more popularity than education, and who insist that all scientists and historians who do not agree with their version of reality are conspiring to break India.

What was supposed to be a glorious economic migration has ended igniting victim complex and fantastic conspiracy theories. What went wrong? Was it the failure of the American Dream? Was it a sense of cultural isolation? Was it a realisation of one’s own inferiority in a foreign land? Was it rage at being misunderstood for religious practices that made perfect sense ‘back home’?

Was it fear to move forward and embrace a new culture, and the simultaneous inability to turn back and return where they came from?
Not everyone in the vast Indian diaspora is successful. But everyone expects them to be successful. The pressure is huge. And back home, there are many who have succeeded without having to migrate, without the validation of the West. The envy builds up, and the rage. One needs someone to blame. A scapegoat. So the new homeland becomes problematic hater of their ancient beliefs as does the old homeland that seeks to move away from the past. The Trishanku yells in the hollow vacuum of social media. Finds meaning and purpose as a troll. And entraps himself in an echo chamber of impotent hatred. And ends up as a pawn in a politician’s game.

This article is also listed under Business, Queer, Society