Treasures of Mythology: Inside the Fascinating World of the Merchant Class 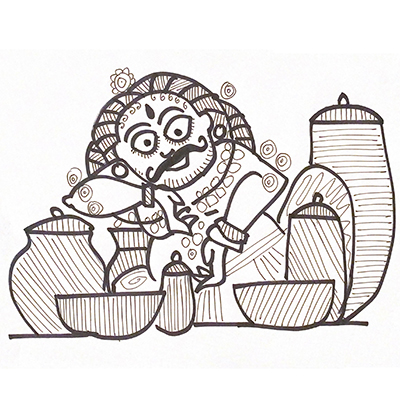 When we read stories from history, we focus on kings and their wars. The reason for this excessive focus on kings and warfare is the fact that the subject of history emerged in Europe in the 19th century. During this time, kings themselves wanted to hear stories of the valour of their ancestors. Therefore, historians focused on the creation of empires. If Europe was controlled by the merchant class instead of the kings, then history would have followed the history of the merchant class. We would then have an increased amount of knowledge about stories of merchants. However, now historians are realising that history is more than the story of kings. They are gradually focusing more on the mercantile class.

The same applies to mythology. Mythology focuses on tales of kings and priests, rajas and rishis. It does not focus on stories from the merchant class. However, when we shift our gaze, we find fascinating stories related to the merchant class, especially in local folklore.

One of the lesser known folktales relates to the Agrawal community. Maharaja Agrasen, a king, who created a city of merchants, once invited the best entrepreneurs to live in his land. To get people to come to his kingdom, he would request all his existing subjects to give the new immigrant one brick and one gold coin. That way, no single family felt the great burden of helping the new immigrant. The immigrant got a set of bricks and a set of gold coins. With the bricks he could build a house; with the coins, he had capital to start a new business. If successful, he would be forever obliged to the community that gave him the startup capital. Thus a global community was born under the merchant king, Agrasen.

In Kerala folklore, we learn of a extremely talented Jewish or Muslim trader, called Uppukottan, who is able to sell salt in a land that manufactures salt and cotton in a land that manufactures cotton. This comes from the Parayi Petta Panthirukulam collection of tales, that speaks of the magnificent qualities of a dozen children born of a Brahmin father, a Dalit mother, and raised by different communities. It is a subversive narrative that challenges the concept of caste hierarchy.

The Buddhist Jataka collection is also full of tales of merchants. Apanna Jataka tells the story of a merchant who makes sure there is plenty of water to survive a long journey despites efforts of a rival to get him to carry less water, and die of thirst in the desert. The Vannupattha Jataka tells of a merchant who finds water when he perseveres despite many obstacles. The Serivanija Jataka speaks of unscrupulous merchants who undervalue goods to make profits. Cullaka-Sethi Jataka speaks of a merchant who realises that business is a function of demand and so works hard to exploit various situations. Tandulanali Jataka speaks of how the value of goods must be determined by market forces not randomly to make profit for the king.

Then there is the story of the courtesan, Bindumati, from Milinda-Panah, who treats all customers equally provided they pay her fee. She does not care for their social status. She sees them as customers, nothing else. Tamil Buddhist epics speak of merchants who arouse the envy of kings because their wives wear anklets studded with diamonds unlike queens who wear anklets studded with pearls.

In the Bible too we find tales involving mercantile class. In the famous parable of talents, found in the New Testament, a master gives money to three of his slaves and is pleased with the two slaves who invest the money and give him back more money, the capital plus profits. The third slave who simply keeps the money safe is not appreciated.

There are merchant tales, like ‘The Adventures of Sinbad’, which are part of the Arabian Nights. Sinbad was an adventurer merchant sailor, who travelled across the world. The story of Sinbad is told by a rich Sinbad to a poor Sinbad. The rich Sinbad is a merchant, who, after many adventures has made a lot of wealth, while the poor Sinbad is a porter wondering what his fate is. The story talks about taking risks in faraway lands. This enables one to generate wealth and live a comfortable life in the future. Sinbad stories, thus talk of a time when Arab merchants travelled across the Arabian Sea. They traded goods from one part of the world to the other, and brought prosperity to faraway lands.

Today, historians focus on kings who built stupas, not the merchants who funded the cave-temples of Buddhists or the merchants who built the Jain temples atop hills of Girnar in Gujarat, or the merchants who probably built the cities of Harappa, or the Baniyas who name was given to the banyan tree because under its shade they gathered to settle accounts and dispute after spending the day in the market. Time to rectify the old approach to history and mythology, and include more communities.