Transplant this soul in that body 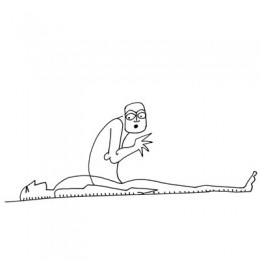 The Hollywood film Freaky Friday tells the hilarious story of what happens when a mother and daughter switch bodies. The mother wakes up in her daughter’s younger body and the daughter wakes up in her mother’s older body. Comic situations follow as the mother tries to keep her daughter’s cute boyfriend, who is smitten by the sudden spurt of maturity, at bay. And the daughter has to deal with her mother’s rakishly handsome fiance and run her mother’s psychiatry practice. As the story proceeds, the two begin to understand each other better. All this happens because of a spell in a fortune cookie.

Over a thousand years ago, similar stories were told in India. Bodhayana’s Bhagavadajjukam is one such tale. A farce written in classical Sanskrit, it tells the story of a holy man, or Bhagavada, and a courtesan, or Ajukka. Depending on which version you read, the holy man is either Buddhist or Hindu, or simply a yogi with magical powers known as siddhi, especially the fascinating ability to consciously leave one’s own body and enter and enliven a dead body. Known as Parakaya Pravesha, this ‘yogic power’ has been the stuff of ancient Indian lore.

The powerful, but pompous, holy man is followed by a confused and mischievous disciple. The story begins when the duo encounters a beautiful courtesan. The holy man does not like her lascivious ways but the disciple is so smitten by her beauty that he cannot focus on his guru’s teachings. One day, a snake bites the courtesan and she faints. A Yama-duta, servant of the god of death, arrives and takes her soul to Yama. Overcome by grief, the disciple tells his teacher to bring the dead courtesan back to life. The guru can’t do that. So the disciple begs his guru to do the next best thing, Parakaya Pravesha. He even goads his guru to prove he truly has that magical power. The guru finally agrees, leaves his body, and enters the corpse of the courtesan. Thus the courtesan comes back to life; the only problem is that now she thinks and behaves as the guru. At exactly the same time, the Yama-duta returns with the courtesan’s soul; he has made a mistake and it is not the time for the courtesan’s death. Finding her already alive, he puts the soul in the guru’s body. So the guru now behaves like the courtesan, even flirting with the disciple, to the irritation of the guru who is trapped in the courtesan’s body. Eventually the mess is sorted out by the Yama-duta, who has had his share of fun.

This story is a comedy aimed at revealing the deep rivalry between monks and courtesans, and the supposed magical powers of holy men. It also speaks of the divide between the body and the soul, with the soul being seen as a combination of the mind as well as the life force.

In the 14th century, 500 years after Adi Shankara travelled around India, his biography, Shankara Digvijayam, tells the story of how Shankara was challenged by the wife of Mandana Misha, Udaya Bharati, to a discussion on kama, or erotica. To educate himself, Shankara, an ascetic, left his body using his yogic powers and entered the body of a king called Amaru who had just died. In other words, he practiced Parakaya Pravesha, similar to what is mentioned in Bhagavadajjukam. Using the king’s body as an instrument, he experienced the erotic arts and wrote about his experience in a set of poems known as Amaru-shataka. Here, the tale is not funny; it is rather serious, enabling a holy man to experience the pleasures of the flesh without ‘polluting’ his body. It reveals an understanding of gender, physiology and occult science in medieval India, and also how they inform our current notion of holiness and purity.