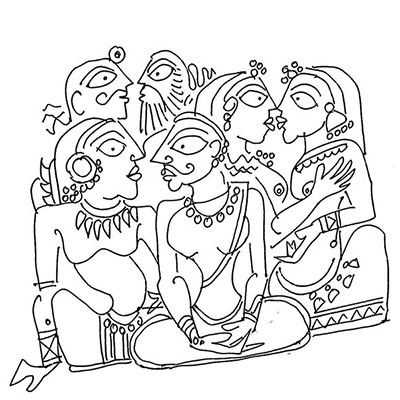 In Greek mythology, there are many stories of homosexual love: where men love men, and women love women. Apollo falls in love with Hyacinthus, while his sister Artemis drives Callisto away when she lets a man make her pregnant. In Hindu mythology, we don’t find such stories. But we do find tales of transgenders: men turning into women, women turning into men. Vishnu becomes a damsel and Shiva becomes half-woman. So while Greek mythology reveals a comfort with queer sexuality (invisible feelings), Hindu mythology reveals a comfort with queer gender (visible body).

There are Greek myths of transgenders, such as the tale of Tiresias who becomes a woman when he kills a female snake. But these are not dominant themes. Likewise, homosexuality is not a dominant theme in Hindu mythology, though tales like that of Shudri-Brahmini tirtha do indicate lesbian love.

This divide is reflected in modern LGBTIQ politics. The West, influenced by Greek mythology, shows greater comfort with the homosexual than with the transgender. By contrast, India, influenced by Hindu mythology, shows greater comfort with the transgender than with the homosexual. So, we have the Prime Minister of India, Narendra Modi, speaking very comfortably about transgender rights, but Ramdev Baba, yoga expert and FMCG guru, vociferously opposing gay rights, insisting it is a disease that needs cure with breathing exercises. At the Simhastha Kumbha Mela at Ujjain, the government had no problem providing transgenders’ (known locally as kinnara) toilets. Contrast this with debates on transgenders’ toilets in America and the rise of trans-phobic feminists.

Abrahamic religions shun all reference to queer sexuality and gender. God is avowedly masculine and so are most of his prominent prophets. There are tales of homoerotic love, like between David and Jonathan, son of Saul, but the spotlight is on cities of Sodom and Gommorah that were destroyed by God because residents of this city enjoyed the queer. From this mythology comes the homophobia and trans-phobia seen in the more conservative Jewish, Christian and Islamic communities.

The rise of homophobia and trans-phobia in India can be traced to conservative Christian and Islamic communities and to Hindu supremacists trying to reframe Hinduism along Abrahamic lines. Interestingly, in many parts of the Middle East and Central Asia, the practice of baccha-bazi (man-boy sex) is prevalent, and female transgenders are seen as women, but neither is qualified as unnatural or queer. In Hindu, Buddhist and Jain literature there are clear references to three genders: male, female and queer. There are many words for men who are not quite men and women who are not quite women. Kliba in Sanskrit; pandaka in Pali. No one can deny that transgenders are part of Indic culture.

But homosexuality? Of men loving men and women loving women. That is not so clear cut, and open to interpretation and argument. In temples, the goddess is often enshrined with another goddess; on temple walls we see two sages always together. How do we read these images? If you fundamentally believe any kind of sex is bad and are embarrassed by your desires, then even the suggestion of homosexuality (or its toned down versions), homoeroticism and homosociality, is bound to get your knickers in a twist.