To Goddess, With Love 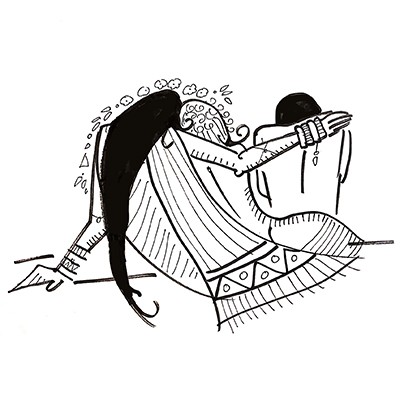 A short story by Devdutt Pattanaik
Published on www.gaybombay.org on 1st June, 2018.

Just got your wedding card via email. Congratulations! I will not be able to come. I am sure you understand. I don’t want to make things even more awkward for Subhashish. I don’t think he knows we are in touch. Let things be that way.

I wanted to write this letter the old-fashioned way, by hand. It is a lost art. I pulled out my old fountain pen, to write this letter. I wanted to write on handmade paper, but I thought that would be too much. So, this simple A4 size paper should do. No frills. No tassels. But I had to start with the श्री. I can see you rolling your eyes. But I was raised that way. I am that American Hindu that you young Indians love to make fun of. Those whose lives paused the day they migrated to the USA. Those who genuinely believe that the India they left behind was much better than their American dream. I am that character played by the brilliant Tabu in the film. “Namesake”. Did you see it? (The book I am told was better.)

But I am so happy for you. You got your green card, and your girl. Good for you. You are living the life, I so wanted to live. Not that mine is bad. But it is not the same. Oh my, do I sound jealous of you.? Maybe I am. It is okay to be jealous of young people. All old people are. I was jealous of you the day I saw Subhashish look at you the way he did, every day, you were married. I was no longer the main woman in his life, his Goddess. He had his own Goddess, one who had been brought for him, just for him, all the way from India. Well, he brought you. We just went along. We were happy he did not want to marry those awful American Hindu girls. We were happy he was getting a good Indian girl from Delhi, educated, and cultured. We were nervous that you may not adjust to his American ways. And you took us all by surprise.

I have a confession to make. Hence, this letter. I have been meaning to tell you for a long time. But did not have the courage. I saw you with Ankita on your wedding day. You were in the bathroom of the hotel, holding hands, and you let it go when you saw me. I saw the look in your eyes, your exaggerated excitement on seeing me, and I knew at that moment that Ankita was not just your friend. She was special. I thought, just like me, you were crushing your dreams to marry a man to make your parents happy. And hoping America will take away the pain. It never did for me. But you had other plans. And what a plan, what strategy… You, using marriage to get to America, Ankita using the college route… America is truly the land of possibilities. I wish I could do what you did. Walk away from my marriage as soon as I got my American citizenship. But these ideas are new. No one thinks like that. Your generation has more freedoms than you can imagine.

I loved you more than a daughter-in-law, because you were just like me, in so many ways. I hoped you would make Subhashish happier than I made Binoy. I knew it would be tougher for you. Binoy was a kind man. He respected my wishes. If I did not want him to touch me, he would stay away. Subhashish is a go-getter. He would not accept a no. I feared for you. I know what happens to women who say no. We all do. But you were good. He adored you. I think you adored him too. Sometimes I get angry with you. He is after all, my son. And I think you used him. You used us. But then I calm down. Your elaborate plan helped me. Your arrival helped me. I felt so close to you, in ways few can understand.

It is in America that I heard this word ‘lesbian’. I still don’t know what’s the word in Bangla. Or Hindi. I heard America use this word as an insult and later as an identity. I have heard friends giggle about ‘lesbians’ and I have laughed at jokes about ‘those’ girls. I had reconciled to my simple life with my non-demanding husband and entitled son. It was a good life. A rich life. How many Indian women can say they have two cars in their front yard and a swimming pool in the back yard and a three-storeyed house? My friends in India were all envious. Even Vidya, the girl I loved, who never knew and still doesn’t know my feelings. Oh my God, am I making any sense? Your wedding card is bringing back so many memories. I want to write this down and put it in an envelope and send it to you, as a sign of my love. Because I genuinely want you to know I don’t hate you for breaking my Subha’s heart. In fact, I love you for helping me discover mine.

I am also writing this letter to give you some big news. Sit down. And prepare yourself.

I came out. Yes, I did. I took your advice and came out. Not just to myself, but to Binoy too. Not Subhashish. I am too scared of telling him. I saw how he behaved with you – the awful language he used. If he does the same to me, I will not be able to handle it. I understand that he was hurt. But the language… We come from good families. We don’t use such words. I did not know he used such words. I was always proud that my son, even though he was raised in America, never used such words. But then I saw him lashing out at you, at home, in public, in court. I was so ashamed of him. I just could not be supportive of him. To lose your grace and dignity, is just not done. I apologize for all that he did. I understand his grief, but I will never forgive his meanness. Those words… I am scared he will use them against me too. And that would be too much for me to bear.

I am glad you living your life, Oindrilla. I am glad you found a job, a girlfriend. Now you will have a wife. I am glad you are getting married. I wish I was there dressing you up. I wish I could oversee the wedding ceremony. For the sake of all women like us, who have to crush our desires and make everyone else happy. We are Goddesses, aren’t we? We are given to make people happy. No one asks us if we are happy, with what we are given. We are Lakshmi’s pot, Saraswati’s lute, Durga’s sword, useful in other people’s hand. Not allowed to decide where we want to go, what we want to do, what food we want to serve, what music we want to make, whose throat we wish to cut.

I am happy for you my dear ex-daughter-in-law. I am happy you are living the life you want – and not one that we want you to live. I was so proud of you when you came out. I was torn between wanting to support you and comforting my son. You broke his heart, but you helped me find mine.

His reaction surprised me. It was not what I expected. I held his hand until he regained his voice. He placed his other hand on mine. He was terrified I would leave him. That night we spoke. And he cracked his unfunny joke. He was glad I was a lesbian. So, all those nights when I rejected him, it had nothing to do with the fact that he was short, fat, bald and ugly. We laughed. Binoy is spectacularly ugly. There, I have said it. Even my mother said it. Everyone knew I married him because I could go to America. It was my escape from Kolkata and those unending political debates. I had to make a baby and then I would control the household. It was advice my grandmother had given me a long time ago. Remember, even Goddess Durga’s husband is useless, leaves her to do all the housework, but she rules the divine household, she told me. Every Bengali girl has heard this. Take charge of the household. I just wanted mine to be in America. So that I could enjoy a life my friends would envy. I would never get to kiss Vidya, I would at least have a car. Things would satisfy me.

They do, right? But not entirely. It great to sleep in a huge waterbed, in an air-conditioned room. But then you see that ugly husband who owns the bed, and you, and you want to throw up. Luckily, kind and sweet Binoy never behaved like most men do. He treated me with dignity and respect. I love him for that. And I loved him even more when he cried. He feared losing me. He feared being alone in his big house in America.

Which brings me to the second big news. Binoy asked me who was the girl who had converted me. Yes, he said converted. I confessed it was Penelope. You were the one who told me that Penelope was into me, that she was not just an American who loved yoga. You hinted that her friendly nature was something more. It was. She would kiss me, every time we had a private moment. At home, at school, at picnics. I think she forced James to be friends with Subhashish only to be close to me. I did not mind. I think I even reciprocated those kisses, but kept my distance, enjoying her attention. But when you left, and all hell broke loose, she held my hand and we confessed our love for each other. Twenty years of friendship and unspoken love. She never asked me to leave Binoy. As a single mother, I think she understood loneliness. I told Binoy about Penelope and he said – yes, he said – that we should all live together in the house. Can you believe it? Binoy, the radical Bengali, suggested we should all three live in the house together. I said Subhashish would not like it. And he said, Subhasish is an American raised in San Francisco. He better live up to the city’s reputation.

And so, my dear Oindrilla, Binoy and Penelope and I are living in the house that was once your home. There will be no marriage here. But there will be love. A different kind of love. A mature kind of love. Of people who respect and care for each other, who fear loneliness, and know the value of companionship. And if you and your wife ever want to take a vacation, we have a guest room, and a swimming pool. We can call Subhashish to join us – but I guess he won’t come.

Hugs,
Your ex-mother-in-law,
Also, a lesbian,
Beloved of Binoy and Penelope,
Aarti.