To Burn or Bury. 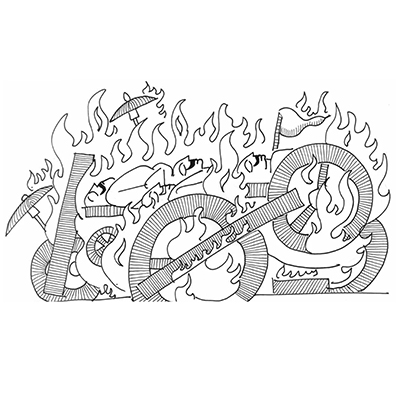 Hindus are constantly reminded of the cycle of life, in ritual after ritual. In Vedic times, 3,000 years ago, bricks would be gathered to build a fire altar where the gods would be invited to come and partake in a meal of soma juice. After the gods had been fed and after they had departed, the entire ritual complex would be dismantled and set aflame. Nowadays, images of Ganesha and Durga made of straw and clay are brought to homes, worshipped elaborately, and then cast into the river, and the cycle repeats year after year after year.

Similarly, Buddhist monks of the Vajrayana order in Ladakh, Shillong and Bhutan create elaborate mandalas with coloured powder only to destroy them at the end of the ceremony, just as Tamil and Telugu housewives create kolam and muggu with rice flour in front of their houses every morning and let it be wiped out during the course of the delay. Those who participate in such rituals are made to experience both the creation as well the destruction, and thus, the idea of impermanence and regeneration. Nothing survives forever. Nothing is lost forever. And this belief is reaffirmed by the Hindu practice of burning the dead, and throwing the bones in a river, leaving no trace of the dead. The dead don’t rest in peace; they move on to the next life. And so, there is no need for a memory, or a tomb.

Yet, ironically, the teacher who most clearly articulated the idea of impermanence, the Buddha, was remembered by his students through the permanent shrine of a stupa built to house his relics. Similarly, stones are raised, and memorials built, at spots across India where a great person, a hero, king or teacher, is cremated, or buried. Dolmens have been raised to the dead in India since prehistoric times.

Across India, elaborate carved stones have been placed to remind people of heroes who died saving cattle or women who burnt themselves on their husband’s funeral pyre. Rajput kings built gazebos to mark the cremation site of kings, mimicking the Persian practice of building mausoleums; it ensured the memory of great kings was retained.

When holy men die in India, they are not cremated; they are buried in the seated position in a pit filled with salt, and a tulsi plant is grown above them, as seen in many Hindu monasteries. It is believed these gurus are not dead; they simply left the body and so their body does not need the final cremation ritual. In South India, most communities still bury the dead in keeping with old pre-Aryan traditions, which surprises most North Indians. In fact, in South India, in Chola times, temples were built at the spot where kings were buried or cremated. This idea of burying the dead and building stone monuments for their bones is found amongst tribes of Northeast India, too.

While cremation, and the idea of rebirth, remains the dominant mythology of the Hindus, we must not forget that it sits upon an older tradition of burial, from the days of the Harappan cities and even before in prehistoric times. They probably did not believe in rebirth.