Tirupati: Playing dice with a god in debt 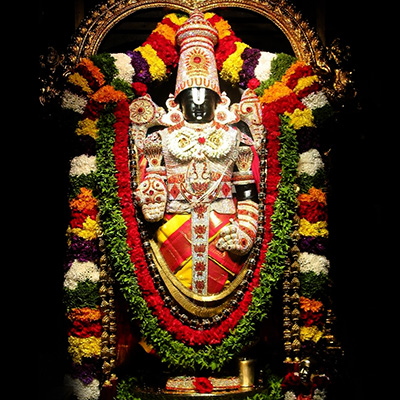 Tirupati is both the name of a pilgrim spot, and the name of the deity who resides there. Tiru is Tamil for what is referred to as Shri in Sanskrit: affluence, abundance and auspiciousness. In the Rig Veda, Shri is a goddess, who in Puranas is identified as Lakshmi. This makes Tirupati, or Shri-pati, the lord of Lakshmi, who is identified as Vishnu. Vishnu descended from his celestial abode of Vaikuntha and made his residence on the seventh hill of the range of seven hills known as Seshachalam in the Chitoor district of Andhra Pradesh. The seventh hill is called Venkatachalam. The resident Vishnu is therefore Venkateshwara. Tirupati is located at the entrance of the seventh hills.

While temple lore states that Vishnu descended on earth eons ago, historically the temple is traced to around 300 AD, and has been patronised by most major rulers of South India including the Pallavas, Cholas, Pandyas, Vijayanagara kings, and later even the Marathas. It is managed by Vaishnava Brahmins of the orthodox Vaikhanasa order. Copper and stone inscriptions in and around the temple are in Tamil, Telugu and Kannada. They include songs of praise composed by poet-saints including the great Annamacharya.

Why did Vishnu leave Vaikuntha? He was following his beloved Lakshmi, who left Vaikuntha, in a huff, following a disagreement. She was upset because a sage called Bhrigu kicked Vishnu on his chest, right on his heart, which Vishnu claimed is the residence of his beloved Lakshmi. Instead of punishing him, Vishnu had fallen at the sage’s feet, apologizing for not welcoming him to Vaikuntha as the sage had expected. Bhrigu was impressed by Vishnu’s humility; Lakshmi was not. She left Vaikuntha, descended to earth, and took residence in Karavirapura (Kolhapur, in Maharashtra) where Vishnu found her smarting, refusing to return.

Vishnu decided to stay on earth until Lakshmi calmed down. He chose the seven hills of Seshachalam as they reminded him of the hoods of Adi-Sesha, the celestial serpent on whose coils he loved to rest. He took permission to stay here from Varaha (the boar), one of his own avatars, who is also husband of Bhu-devi, the earth-goddess.

The story goes that while Vishnu took residence on the seven hills, he had nothing to eat. So Brahma and Shiva decided to take the form of a calf and a cow in order to provide him with milk. A cowherd noticed the cow discharging milk on a termite hill. Angry that the milk was being wasted, he struck the cow with a stick. The cow was wounded, and drops of her blood fell on Vishnu, who was meditating under the termite hill. Vishnu chastised the cowherd and his master, the local king, who apologised.

In some versions of the tale, the king accused Vishnu of being a trespasser and a thief, and the only way Vishnu could stay there was by marrying the king’s daughter, whose name was Padmavati. In other versions, Padmavati was the adopted daughter of another king, born of a lotus flower. She looked just like Lakshmi and so naturally Vishnu fell in love with her and sought her hand in marriage. But the father demanded a hefty bridal price and a huge wedding. Without Lakshmi, Vishnu had no money. He had to turn to Kubera, Lakshmi’s brother, and treasurer of the gods, for the money. Kubera offered to pay for the marriage provided Vishnu promised to stay on earth until the debt was fully repaid, with interest. Vishnu had no choice but to agree. The marriage took place, but as it happens in most Vishnu temples, husband and wife have separate residences, with Vishnu living on top of the hill and the princess-bride, locally known as Alamelu Manga, having her own temple at the bottom of the hill at Tiruchanur.

Devotees who visit the shrine make huge offerings of wealth to the deity to help him repay his debt. In exchange, he gives them his grace – grace that can be used by devotees to generate more wealth, or break free from the attachment to wealth. Guess what devotees prefer? So the cycle continues, the devotees give Vishnu wealth and he makes them rich and so more obliged to give their benefactor more wealth making Tirupati the richest Hindu temple, with a sanctum sanctorum whose roof is entirely covered in gold. Despite all the wealth offered to him by willing devotees, the debt remains and Vishnu remains trapped on earth.

Debt or rina is a key concept in Hinduism. We are born on earth to repay debts to our ancestors, nature, to the gods, to the sages and to fellow humans. So life is about ‘giving’ not about ‘taking’. Giving reduces debt and liberates us. Taking binds us to the world.

At the temple of Tirupati, known for its wealth, its orderliness, its cleanliness, its organisation, its brilliant deployment of technology to make life comfortable to the millions of devotees, one image often goes unnoticed: that of Venkateshwara playing dice with an ascetic called Hathiram baba.

Hathiram baba came to Tirumalai some 400 years ago and would spend hours adoring the deity. This made the temple priests suspicious and they had the ascetic kicked out. The poor ascetic decided to stay outside the temple in a hut, hoping that one day he would be let in. But the priests were adamant. Feeling sorry for his devotee, Venkateshwara himself decided to step out the temple and meet his devotee. They spent time playing dice. One day, the temple noticed that a jewelled necklace of the deity missing. Soldiers searched the vicinity and found it in Hathiram baba’s house. “Oh, my dice game partner must have left it the last time he came,” he said innocently. No one believed him and he was thrown in jail. Since he called himself hathi, or elephant, they put a pile of rice and sugarcane in his cell, stating that as an elephant he was expected to eat all that was served in one night, or face death the next morning. A few hours later, the guards heard a trumpeting sound and an elephant broke open the jail door from within after having consumed all the rice and sugarcane. The elephant then disappeared but the soldiers and the priest were in no doubt that the elephant was Venkateshwara himself who had come to the rescue of his friend, the ascetic who had no money to offer the indebted god, but offered him something far more valuable – love.