Time, Timelessness and the idea of Charity 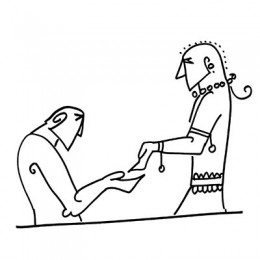 It means that the biblical worldview focuses on solving problems using material things that have a finite existence, while the Hindu worldview focuses solving problems using psychological ideas that challenge material finiteness. The Bible speaks of a Promised Land that will be granted to the Chosen people. It also speaks of blessed are the poor for they shall inherit the earth. The vocabulary is about having, or not having. By contrast, Ramayana and Mahabharata end with Ram giving up his kingdom and walking into the river Sarayu and Pandavas giving up their kingdom and walking up the Himalayas. It’s all about letting go.

Western society focuses on the material more than the mental, because the material is empirical. Everything is viewed in terms of wealth, and holidays. He who has money to spend and time to enjoy is blessed indeed. Monastic orders in the West therefore embracing poverty and serving the poor to uplift them from the status of ‘have-not’ to ‘have’. Equality is about making creating a world where there are no ‘have-nots’.

In Indian thought, there is tension between ‘bhoga’ (satisfying hunger/desire) and ‘yoga’ (outgrowing hunger/desire). Those who chose the former path lived in human settlements and those who chose the latter path went into caves. Indian philosophy rejects the idea of equality as it assumes the world will always have ‘haves’ and ‘have-nots’ but as time passes, the ‘haves’ become ‘have-nots’ and the ‘have-nots’ become ‘haves’, and the wise discover that happiness follows when one outgrows the desire to have ‘having’ or the regret of ‘not-having’.

This subtle difference is often overlooked by scholars who write about Indian or Western philosophy. The human mind refuses to accept rebirth, hence change. We think this moment is permanent. We use Western ideas as benchmarks and templates to explain Indian thought. This is evident in writings about Hindu philosophy in colonial times. There are strong attempts to explain Hindus to the West in Western terms: thus there are concepts like the ‘Gospel of the Gita’ or the ‘Hindu Church’.

Nowadays, there is great popularity amongst Hindu outfits to do ‘seva’ or serve people. The assumption is: if you want to be spiritual, you must serve people. Placed in a biblical framework it makes sense, for it means you are aligning with God’s commandments and following the path of love preached by Jesus. But in the Hindu framework, it becomes a bit problematic. For it is an act done to generate good karma: in other words seva (service) for meva (fat). Thus there is nothing unconditional or selfless about it.

In Sikhism, the gurus said that the person who gives service must thank the person who receives service. Why? Because the charity giver gets credit while the charity receiver gets bound in debt, or ‘rin’. Debt fetters one to worldly life, and becomes an obstacle to liberation, as one is obliged to repay debt in this or another lifetime.

In a global world order, we want to homogenize spirituality. And the process of homogenizing spirituality, we try to standardize worldviews. More often than not, the worldview adopted is the finite time-bound Western one and not the infinite timeless Indian one.