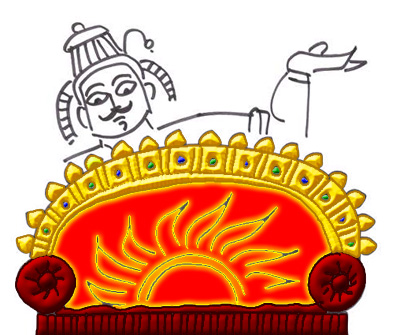 One day a king called Bhoj was passing near a field outside his city.There he observed something very peculiar.As he and his soldiers approached the field, the farmer screamed and shouted, “Stay away, stay away, you and your horses will destroy the crops. Don’t you have any pity on poor people such as me?”Surprised by the behavior of the cantankerous farmer, Bhoj moved away. But as soon as he turned his back, the farmer changed his tune to say, “Where are you going, my king? Please come to my field, let me water your horses and feed your soldiers. Surely you will not say no to the hospitality of this humble farmer?”

Bhoj wondered what was happening. This happened a few more times. Bhoj observed the farmer carefully. He noticed that whenever the farmer was rude, he was standing on the ground. But whenever he was hospitable, he was standing on top of a mound in the middle of the field. Bhoj realized that the farmer’s split personality had something to do with the mound. He immediately ordered his soldiers to dig the mound in the centre of the field. Naturally, the farmer did not like this and kept protesting. But Bhoj paid scant attention to him.

Within the mound, the soliders found a wonderful golden throne. As Bhoj was about to sit on it, the throne spoke up, “This is the throne of Vikramaditya, the great. Sit on it only if you are as generous and wise as he was. If not, you will meet your death on the throne.” The throne then proceeds to tell Bhoj thirty-two stories of Vikramaditya, each extolling a virtue of kingship, the most important virtue being generosity. Thus through these stories, Bhoj learnt what it takes to be a good king.

The “32 tales of Vikramaditya’s throne” is part of Indian folklore. It is often condescendingly referred to as children’s stories. They were never meant to entertain children; they were meant to shape the mind of future leaders. This purpose of children’s stories has long been forgotten. And so very few people notice the most interesting part of this story — what does the king’s throne do to the farmer? It makes him generous. The farmer is insecure and selfish when on the ground. As soon as he is on top of the mound, he becomes generous. On the ground, he is the common man. On top of the mound, he is what a king should be.

The second part of the story is equally interesting. The throne does not let Bhoj sit on it. “Are you as worthy and generous as Vikramaditya?” it asks through its many stories. So we are left wondering — does the throne transform a man into a king, hence generous, or must a man first transform into a generous soul and thus become worthy of the throne? Either way, generosity seems to the hallmark of kingship, hence leadership, at least in Indian folklore.

Animals do not give. They can only take. Through strength and cunning, they take food and shelter, in order to survive. Humans however can give food and shelter enabling others not only to survive but also to thrive. Thus generosity is most peculiar to humans; and the one who displays it most magnificently, is recognized as king. A king or leader is ‘creator of opportunities’.This fundamental reason for the existence of kings is often forgotten.

A gentleman named Sunder had great friends until he became the boss of his unit.The moment he became the boss he started behaving differently, started becoming rude, obnoxious and extremely demanding.The role had changed him. The reason he gave was the burden of responsibilities. That was when, Kalyansingh, the owner of the company decided to have a talk with him. “Do you know why you have been given a higher salary, a car, a secretary, a cabin?” Sunder replied that they were the perks of his job. Kalyansingh asked again, “And what is your job?” Sunder rattled out his Job Description and his Key Result Areas. “And how do you plan to get a promotion?” Sunder replied that it would happen if he did his work diligently and reached his targets. “No,” said Kalyansingh, “Absolutely not.” Sunder did not understand. Kalyansingh explained, “If you do your job well, why would I move you out? I will keep you exactly where you are.”  Looking at the bewildered expression on Sunder’s face, Kalyansingh continued, “If you nurture someone to take your place, then yes, I may consider promoting you. But you seem to be nurturing no one. You are too busy trying to be boss, trying to dominate people, being rude and obnoxious. That is because you are insecure. So long as you are insecure, you will not let others grow. And as long as those under you do not grow, you will not grow yourself. Or at least, I will not give you another responsibility. You will end up doing the same job forever. Do you want that?” That is the moment, Sunder understood the meaning of Vikramaditya’s throne.

As we go higher up the ladder, we should ideally become more secure and hence more generous — the creators of opportunity. When this does not happen, we end up creating an organization full of cantankerous inhospitable farmers and absolutely no kings.