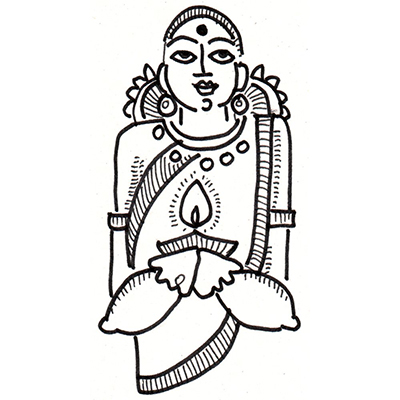 The Rig Veda is about 3,500 years old. It is a set of over 1,000 Sanskrit hymns, organised in 10 chapters by Rishi Vyasa. The collection is dominated by hymns to gods, composed mostly by men. But you will also find quite a few female poets (rishikas) and female deities. They exist in the margins, but we get a sense that they were being gradually mainstreamed. Through the hymns, we learn about the earliest storytelling tradition of India, mostly about the virile macho Indra and his victories. But there are also some stories about women, providing a sense of the Vedic period and attitudes towards femininity and, more importantly, sexuality.

The first story comes from the first chapter itself –a conversation between the sage Agastya and his wife Lopamudra. In the story, Lopamudra encourages her husband to give up his ascetic practices and perform his husbandly duties, in order to experience the pleasure of the senses and produce a child, a necessity for the continuation of his household.

Lopamudra succeeds. She plays the role of an archetypal nymph who seduces the ascetic, though in this case, she is the wife. The stillness, “dheer”, of the sage is taken away by the flightier “adheer” women, suggesting women are associated with fluidity, sensuality and temptations.

Here, we also find, for the first time, the reference to the great Hindu tension between the lives of the hermit and the householder. The hermit desires to attain immortality by restraining his senses and not shedding his semen. The householder believes the only way to move forward in life is by producing children. This tension between the two ideas pervades Hindu thought and can be seen originating in the Rig Veda.

In chapter eight of the Rig Veda, we come across a character called Apala. She has been rejected by her husband because she has a skin ailment, which is suggested as being excessive hair on the body. The story goes that she accidentally discovers the Soma plant and bites it. The crunching sound and release of Soma juice excite Indra, who comes down to earth from heaven and offers her three boons. She requests two things for her father, hair on his head and a fertile field, and one for herself – a beautiful body with sensuous features, free of any skin condition.

It must be noted that she first asks things for her father and then for herself, indicating her selfless nature that pleases gods. Apala becomes an attractive woman as Indra pulls her through the eye of the wheel of his celestial chariot. The shed skin becomes a reptile. Here, we find how the idea of beauty and the desire to be sensual and fertile come to reside with the female.

The third story is in the final or tenth chapter of the Rig Veda. This story, of Urvashi and Purarava, was later retold in the Sanskrit plays of Kalidas. However, the original is very different. Urvashi is an apsara from Swarga who visits earth and marries a mortal, Purarava. Interestingly, the only reference to Swarga in the Rig Veda is in this story. She wants to leave Pururava and return to Swarga to be in the company of the other apsaras. Pururava begs his wife to stay, reminding her of their love. However, Urvashi says she is bored and prefers the company of her female companions, much to Pururava’s resentment. He talks about the welfare of their child. She promises to deliver the child back to him, showing very little maternal instincts.

Finally, he tells her that he would lose his mind without her and die. In admonishment, she tells him to pursue manly pursuits, like governing his kingdom, rather than the sensual pursuits that befit a woman. Urvashi comes off as a cold-hearted woman who rejects her husband and child and moves back to the realm of the heavens. Later stories tell us that the separation is the result a curse; it’s not that Urvashi is disinterested in her mortal husband or prefers only the company of celestial women. This callous expression of desire found in the Rig Veda is absent in later texts.

In the story of Lopamudra, we see her husband as a person who seeks spiritual growth away from sensuality. In the story of Apala, the husband is abusive and drives the wife away. God finally helps her, granting her beauty. In the tale of Urvashi, we find a sensual man who is left heartbroken by his wife’s indifference. While the men are very different in each story, the women are associated with sensuality, fertility, pleasure, household and the material world, an outlook that still persists in many ‘traditional’ circles.